A prestigious East Hampton institution, the Maidstone Club was established in 1891 but its members didn’t start golfing until the introduction of a modest three-hole course a few years later. As the game’s popularity increased so too did its golf course, from three to seven to nine and finally to a full eighteen holes by 1898. This first full course was inland of the sea, and it wasn’t until the club’s 1922 decision to expand to 36 holes that it evolved into the gem that is so widely admired today.

Champion Scottish golfer Willie Park Jr was hired to plan the new courses and he was given permission to push his holes closer to the Atlantic shoreline. Although the second course was subsequently reduced to nine holes, the championship layout has survived virtually intact from Park’s original proposal. Its opening and closing holes are partly routed on the inland side of a large tidal pond, with the central twelve squeezed onto a tight 80-acre peninsula wedged between the water and the spotless beachside dunes. To many this section is as close to genuine linksland as exists in America, and Park’s uncomplicated design compliments the soft, bumpy terrain perfectly. Conscious of the fact that wind can drastically alter the nature of the course, he was careful not to over-design his holes and instead kept green and bunker shapes relatively simple and in tune with their surrounds.

While the holes away from the beach are solid and well designed, the best golf at Maidstone is found around the pond and on the sandy peninsula. The first really outstanding hole is the 6th, its fairway bending around a wetland area and its green built with a higher left side to complicate the approach for those unable to hug the water with their drive. The short 8th is another fine hole, this time with its putting surface angled away from the tee and partly obscured by a sand dune. The most celebrated holes, however, are back-to-back par fours at the 9th and 10th. Running alongside the Atlantic, the fairway on the 9th is sheltered by tall dunes and its approach is played uphill into a plateau green set beyond a deep hollow. This looks one of the most naturally attractive links holes in the country, but the fairway was actually created by Park’s team, who cut away part of a dune and then pushed the sand to the side to create the ridge that separates it from the 10th. The final obvious glamour hole is the short par three 14th, which heads straight toward the ocean and an isolated green site surrounded by sandy scrub.

Willie Park passed away shortly after Maidstone opened and he sadly never saw the finished product. His brother John was responsible for building the course and little has changed since he first had it ready for play in 1924. Modern issues include cart damage on the unirrigated fairways and its general lack of length, many golfers unimpressed by things like having three par fives under 500 yards in a four-hole stretch. The beauty of these holes, however, is that they rarely play the same way on consecutive days and one of the great challenges here is hanging onto the shots gained on downwind holes when the wind is into your face.

While Park gets great credit for his design at Maidstone, the club deserves equal praise for the firm and bouncy manner in which the fairways and greens are maintained. Although there is no doubt the course wouldn’t rate quite so highly were it surrounded by the big guns on the British coastline, this traditional old layout is terrific fun to play and will particularly delight passionate enthusiasts of Golden-Age design. 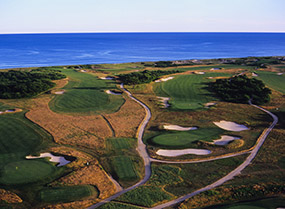 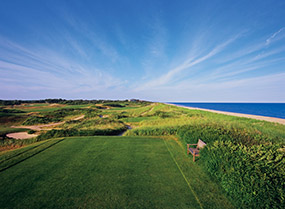