Situated in the heart of the Sonoma Valley, north of San Francisco, the Mayacama Golf Club opened in 2001 as a prestigious golf, wine and residential retreat built for a small, discerning membership. Set attractively within the foothills of the Mayacamas mountain range, the club’s sprawling property covers more than 650 acres and was once owned by the ‘Peanuts’ cartoon creator Charles M. Schulz.

Built within a series of peaceful hills and deep valleys, the golf course was designed by Jack Nicklaus with his holes weaving across a forested landscape and skirting a grand collection of oak, madrone and manzanita trees. The whole development is very tastefully master-planned, with the housing mostly located on a high ridge and set well back of the rolling fairways. It seems clear that Nicklaus was given first choice of the available land for his design, and he incorporated various natural features into the holes including dense ravines and smaller creeks and ditches. A number of the longer holes bend around trees and feature cross-hazard approach shots, while the shorter holes tend to have target areas set at the base of slopes, and are fairly penal on those who miscue their tee shot.

The view out across the golf course from the Mediterranean-style clubhouse is a stirring introduction to Mayacama, with the excellence of the turf and the quality of the shaping apparent from the outset. Although there isn’t an abundance of strategically stimulating holes, the course is beautifully built and carefully routed to ensure maximum drama and create a number of impressive backdrops. The greens are particularly effective, bentgrass and lightning quick they feature subtle rolls and ridges designed to feed weaker balls back off the putting surfaces.

Individual highlights include the strong par four 6th, sweeping right and crossing a gully protecting its contoured green, and the mid-length 7th, which bends almost 90 degrees in the other direction and features a fun pitch shot across a ditch. The best stretch of golf, however, comes through the middle of the back nine and includes the likes of the 14th, a short cross-valley par three with a small green built on a hillside ledge, and the fine dogleg 13th, its approach played into a shallow target set beyond a deep creek. With a wonderful view of the surrounding countryside from its elevated tee, the heroic par five 15th is also very good, its falling fairway turning sharply to the left and its green benched attractively beneath a hill and beyond a nasty ravine. The short par four 16th is another nice hole, despite offering little incentive for the average player to gamble from the tee.

There is a lot of competition in Northern California, and though Mayacama isn’t the best course in this part of the state, it is a very commendable estate layout that modern golf fans, in particular, are bound to enjoy. Interestingly, the club is equally devoted to wine as golf, with members not only given their own private wine lockers but the opportunity to associate with some of the region’s premier vintners, who are made honorary members here. 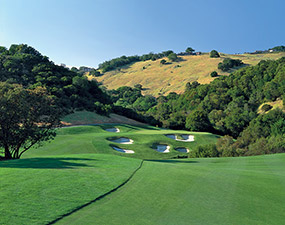 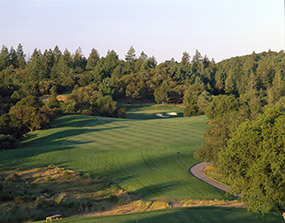