One of America’s most highly-rated tournament venues, the Medinah Country Club was founded by Shriners from Chicago's Medinah Temple, who in the early 1920s purchased enough land in northern DuPage County to build a world-class country retreat complete with three full-length golf courses. Tom Bendelow was retained as golf architect, his famed No. 3 course opening in 1928. Initially considered too easy, the layout was overhauled a few years later with the strengthened version quickly establishing itself as the club’s championship test.

Routed through a rolling oak forest and crossing Lake Kadijah several times, the modern No. 3 still follows Bendelow’s general plan, although the practice of lengthening and toughening holes has become more frequent and rigorous as the decades have passed. Aside from the tees continually being pushed back, the fairways have also been narrowed and a number of greens relocated. This work has been done by a number of consulting architects, including most recently Rees Jones who, in 2002, stretched the track beyond 7,500 yards from the tips. Jones also rebuilt the bunkers and redesigned a number of key greens, including each of the cross-lake par threes.

Although it does provide a supreme test for professional events, for average golfers No. 3 lacks the subtlety and variety of really elite championship courses. With the exception of the 8th, each of the par threes play directly across the lake, and in much the same manner, while most of the longer holes are claustrophobic and uncomfortably narrow. Fairway bunkers are employed sparingly and rarely used strategically, generally only appearing in places where the tall oaks don’t pinch landing areas tightly enough. The course basically tests your ability to continually hit straight, precise shots, there aren’t really tactical angles to consider nor is there much chance of playing fun, out-of-position recovery shots as any slip up here, however marginal, is intended to cost you a stroke or more.

Holes like the 9th, 11th, 14th and 16th are horrendously cramped by trees and terribly unfair on players unable to move the ball both ways with length and precision. The hardest is probably the 16th, which horseshoes around huge trees, then heads up a very steep incline into a small target with a severe front that feeds weak balls 40 yards back down the fairway. Of greater interest are more forgiving holes like the gently rolling opener and the uphill par four 4th, which is as severe on short approaches as the 16th but much more playable from the tee and with a larger back-to-front green. Another quality hole is the long two-shot 12th, its green guarded by a huge oak on its left side and the approach played from a left-to-right side-hill stance. The 6th, 7th, 8th and 15th holes are also fairly solid.

Despite areas of mediocrity, there is some decent ground movement here and with a better routing, more imaginative green complexes, some strategic bunkering and heavy tree clearing this could be a terrific layout. The founding fathers of Medinah, however, aimed to create America’s premier country club and they have continually sought and hosted high-profile tournaments. This focus on retaining championship prestige has ensured ranking list prominence for No. 3, though, in truth, the course is a notch below many of those ranked beneath it. 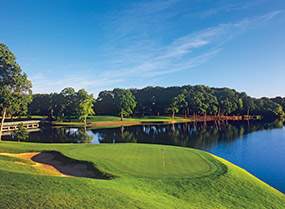