The Dunes Course at the Monterey Peninsula Country Club first opened for play in 1925, having been routed and initially designed by Seth Raynor, but completed by Robert Hunter after Raynor’s untimely death. Hunter was a partner with Dr. Alister MacKenzie and his design style was vastly different to the rigid, linear method used by Raynor. Hunter preferred more natural looking shapes and hazards, and as a result of their diverse styles, and some significant budgetary restrictions, the finished Dunes Course failed to match the standards set elsewhere in the Monterey area.

While Raynor’s routing was commendable for the manner in which he used the site’s sand dunes and its varying internal undulations, there were always problems at MPCC in the wetter months, as the drainage was poor and fairways invariably became damp. During the late 1990s Rees Jones was engaged to rebuild the course, improving fairway drainage was a priority but so too was modernizing the Raynor/Hunter holes. Jones’s work focused on adding subtle crumples into the fairways to aid water circulation, while also rebuilding a number of the Raynor template greens sites. There is no doubt that the previous incarnation of this course had problems, and equally that Jones improved the condition of the playing surfaces in winter here. Whether he truly improved the design of the golf course remains a subject of debate.

The most obvious highlight of the Rees Jones work at MPCC Dunes is the par three 14th hole, which had always played on the sea side of 17-Mile Drive, but was pushed right against the rocky coastline during the 1998 Jones redesign. This is now clearly an exciting shot to hit, though one only has to study MacKenzie’s shaping of the nearby 15th hole at Cypress Point to recognize the difference between a great hole and a good hole in a great spot. The artistry, movement and originality of the Cypress hole is sadly lacking here on the 14th, which is not to say that it’s a poor hole, but rather that if you remove the ocean it’s somewhat uninspiring.

The rest of the Jones work at Monterey Peninsula Country Club is similarly unremarkable, which is disappointing given there are some nice sandy ground contours and beautiful outlooks here. The course isn’t bad by any stretch but those looking for a cerebral challenge are much better off seeking out the impressive Shore Course first.

It has been said that the Monterey Peninsula Country Club is looking to reshape its Dunes Course once more in the years ahead. Given the bare bones here are outstanding, and the routing needs very little adjusting, the prospects for the club are very promising. Provided they select an appropriate architect, there is no doubt that when the work is finished they should be the proud owners of a second American classic. 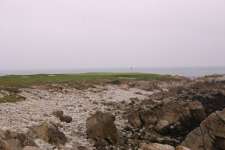 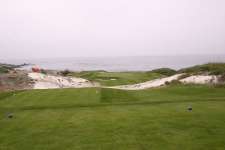