‘I hope to carefully shape this new course so she will bend and sweep with the natural terrain of rocks, trees, grasses and ocean. My dream is that she will appear as if she has been dancing among the cypress on this coastline forever.’ Mike Strantz

The Monterey Peninsula Country Club was formed during the 1920s, as part of a separate residential development by Pebble Beach founder Samuel Morse. Situated on the Peninsula’s western coastline, and sandwiched between Cypress Point and the township of Pacific Grove, its first course was designed by Seth Raynor while a second track, the Shore Course, was added in 1961.

Hurriedly built and long regarded as the club’s poorer sibling, Shore was originally designed by Bob Baldock and Jack Neville, but by the turn of the 21st century was in such desperate need of repair that the club decided to undertake a substantial upgrade of the entire layout. A number of well-credentialed architects were considered for the job, but Mike Strantz won the contract based largely on his feel and passion for the land. Excited by the prospects, Strantz proposed a radical new routing scheme that involved reversing the existing direction of play so holes would turn toward the ocean rather than play away from the water. The designer started work on the project in early 2002, around the same time he was diagnosed with an aggressive form of cancer that would sadly take his life shortly after the course reopened.

Despite his deteriorating physical condition, Strantz remained on site throughout the construction process, working side-by-side with his shapers on every feature of the design. He retained the skeleton of the opening and closing holes, but crafted twelve entirely new holes out on the expansive seaside areas, aligning a number of his greens and fairway turn points toward the Pacific or the neighboring Cypress Point Club. The broad fairways flow nicely across the terrain while putting surfaces are generally large and sensibly contoured to thoroughly test approach play but leave a range of fun recovery options. Many are set beside attractive rock formations or protected by punishing sandy wastelands.

Although a few of the holes within the housing remain a touch underwhelming, the heart of this course is outstanding, particularly the coastal loop from the 5th through to the 12th. There are just two par fours in this stretch but plenty of variety and subtle elevation changes. Decorative boulders are prominent on several high-quality par threes, and also well used on the long 6th and the doglegging 15th, its approach played into a terrific skyline green framed by the distant ocean. Also excellent is the short par four 5th, bent strategically around a protruding hazard, and the outlooks beyond the 8th, 12th and 13th greens, the latter with magnificent views of the dunes at Cypress Point.

The decision to allow Mike Strantz to redesign the Shore Course was deemed risky at the time, but ultimately he proved a most astute architectural selection. Given strong local competition, this was never likely to be top dog in Monterey, but the membership is now very proud of their course and its transformation has further strengthened the appeal of the area for visiting golfers. The premature death of the designer was a great loss for our sport, as there is no doubt that the success of this project would have kept him busy for many years to come. 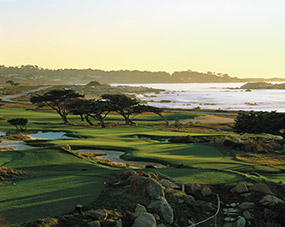