‘I set out to build not only an outstanding golf course for every level of player, but a magnificent course for watching a tournament’ Jack Nicklaus

Co-designed by Jack Nicklaus in the prime of his extraordinary playing career, Muirfield Village is an exclusive private club situated a little north-west of his hometown of Columbus, Ohio. The club was modeled after Augusta National and Nicklaus, like Bobby Jones, was involved in its creation from the outset. Along with club founders he undertook an exhaustive search of the outer reaches of the city for a suitable site, eventually settling upon a beautiful 220-acre property along the banks of the Scioto River.

With rolling ground, a trickling creek and a mix of mature trees, the chosen site was ideal for exciting golf but Nicklaus was an inexperienced designer so he partnered with architect Desmond Muirhead on the project. Muirhead was primarily responsible for the routing and did a terrific job arranging the holes across the sloping landscape. The pair apparently didn’t get along, however, and Nicklaus became chief custodian of the course following its 1974 opening, spending the ensuing years continually refining and reshaping the holes into a fine modern championship test.

Dominated by water and constant elevation changes, the layout is visually stunning and full of variety from the tee as holes sweep both ways across the terrain. Muirfield Village is very much a second shot course, however, as the greens are small, quick and guarded by deep traps or pushed against ponds and creeks. Approach play is regularly complicated by false fronts and subtle breaks off the surrounding bunkers, which are both well placed and attractively built. Nicklaus regards these hazards as his primary defence from low scoring professionals, and has regularly altered them to make them more challenging. After experimenting with furrowed rakes, in recent years he has made them deeper to ensure a genuine penalty follows a misdirected stroke.

Not surprisingly, the better holes here are those where the water and elevation changes are best utilized. Interestingly, the 1st fairway bends right against a gentle right-to-left gradient while the 2nd hole moves slightly left but leans toward a stream down its right side. Both have excellent greens, as does the 3rd, which turns through trees toward a small target pressed hard against a pond. Similarly dominated by strategically positioned water, the 5th is a tempting split fairway par five dissected by a creek through the last half of the fairway. The shorter holes also work well, the downhill 8th has a tight green surrounded by sand while the 12th resembles the 12th at Augusta National with its shallow target set diagonally across the tee and directly beyond a lake.

The mid-length 14th is another fine hole, generally approached with a wedge it features a seriously wicked green that is banked against a pond and angled sharply toward the trouble. The next is a narrow par five that rises and falls through trees as it heads into an attractive plateau green site. Consistent with the entire layout, the finish is also daunting with few birdie opportunities and plenty of areas to make bogey. About the only oddity is the 17th, which is the only hole that deviates from the original routing and neither fits strategically nor visually within the rest of the course.

Muirfield Village was one of Jack Nicklaus’s first major design projects and many contend it is still his most significant piece of work. The course strongly resembles Augusta National, and although it may not quite reach the level of Bobby Jones’s cherished Georgia creation, it shares similar traits and is an equally ideal venue for professional tournaments. 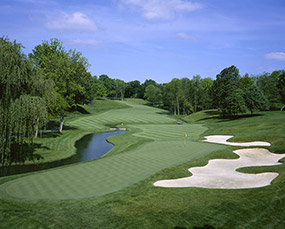