Supposedly founded by a group of bespectacled men from Boston, the charming Myopia Hunt Club was established as a golf, horse and hunting club in the village of South Hamilton in 1894. Designed by member Herbert Leeds, the first nine holes were opened in 1896, with the full eighteen completed by 1901.

Built across a series of unspoilt hills, in the most peaceful and secluded setting imaginable, the course is dominated by a broad central ridge, with a number of holes routed up, down and across its rugged fescue-strewn slopes. This is classic turn-of-the-century New England-style golf but although there are blind shots, hidden greens and punishing central bunkers, the shapes here are generally softer than at Brookline and Essex, meaning you are less likely to get harsh kicks and uneven lies.

Leeds spent the best part of 30 years refining Myopia, and the quality and variety of his design work is very impressive. Like Henry Fownes at Oakmont, he believed in protecting par by aggressively bunkering holes and famously used to watch good players closely and then build bunkers wherever he felt their poor shots had not been sufficiently punished. He also dug his existing traps deeper if escape became too simple and mixed irregularly shaped trench-like bunkers with smaller, narrow pits where it is difficult to even take a proper swing at the ball. The greens are also severe, a number so steeply pitched that they only have a handful of pin locations.

The starting holes here are particularly intriguing. The opener measures less than 280 yards but is played along a shoulder of the main hill toward a small, angled skyline green site. Those who drive strong and straight off this tee are likely to make birdie, while anyone who hits too safely to the right is left battling for their par. Plunging off the hill and onto the linksy lower ground, the short par five 2nd is another birdie hole for those able to avoid bunkers and safely find its hidden punchbowl green. The next few holes will take plenty of shots back, however, starting with a monster one-shotter at the 3rd, which features deep bunkers and a small target that you attack at your peril. The 4th then bends left around a marsh area and its green leans so sharply forward that driving away from the hazard leaves a frightening approach. Even if you hit this green in regulation, it is quite possible to putt your ball back into the frontal traps.

Other notable holes include the beautifully undulating 7th and the impossibly narrow par three 9th, its target only a few yards wide and surrounded almost entirely by sand. Perhaps the hardest par on the course, the 12th is also outstanding as it meanders up through a shallow, twisting valley toward another tiny green site. The finishing stretch is memorable for a falling par three at the 16th, a clever mid-length sleeper at the 17th and a brilliant closer that features a tight, leaning fairway and a daunting approach that heads across deep bunkers and into a menacing target.

Incredibly, Myopia Hunt Club has barely changed since it last hosted the US Open in 1908. There was a period where the site had become over-planted, but the removal of hundreds of trees has helped the fescues thrive and returned the layout’s spacious links characteristics. This really is a wonderful place to golf; the terrain is ideal, the holes are constantly engaging and the only distraction as you play is from the occasional horse trotting by. 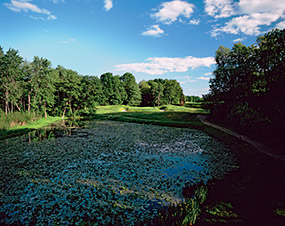