Established by a group of affluent Rochester businessmen, the Oak Hill Country Club began life in 1901 on a small nine-hole pasture course beside the Genesee River. The course was soon expanded to eighteen holes but in 1921 the University of Rochester proposed a land swap, offering the club 355 acres of farming land in the nearby town of Pittsford in exchange for its riverside property. The university would also pay for a new clubhouse and the construction of two 18-hole courses. Donald Ross was then asked to consider the land’s suitability for golf, his enthusiastic report convincing members to accept the deal.

What impressed Ross so much about this site was its mix of high ridges and rolling hills, as well as a meandering creek that wandered across some of the flatter areas of the property. His original plans made careful use of the natural elevation, with the West Course set mostly among the steep ridges and the East holes dropping between the lowland areas and a large central hill. Both courses opened in 1926, and were soon accompanied by thousands of trees, mainly oaks, that were planted by a prominent member and now dominate the landscape.

Interestingly, Ross considered the West Course to be best suited for hosting championship play, but it was the more spacious East layout that tournament organizers were drawn to, primarily because it could be lengthened, narrowed and made more difficult. As a result, the East Course has become the club’s centerpiece but it has also been changed the most significantly. Aside from the growth of trees and the softening of green slopes to accommodate greater putting speeds, back tees and bunkers were added by Robert Trent Jones in the 1950s and the par three 6th and 15th holes were redesigned by George and Tom Fazio in 1976. The Fazio’s also made major alterations to the 5th and 18th greens, the latter moved forward by 30 yards to accommodate grandstands.

Despite the fact that trees have altered the nature of the challenge and hurt some of the better holes, Ross’s outstanding use of existing ground contours ensures plenty of exciting golf. Better moments include an uphill approach into a small, concealed green at the 2nd, the wonderfully bunkered plateau par three 3rd and the wildly undulating 9th, which turns around the entrance road and rises steadily into a cool target. The ride up the massive 13th fairway, and the pitch into the elevated and sharply angled 14th green, are also thrilling. Of greatest disappointment is the general loss of Ross’s distinctive green shapes and the fact that the first three Fazio targets seem unduly complicated and are out of character with the rest of the course. Equally concerning is how the profusion of trees along the 7th fairway have turned a magnificent, strategic two-shot hole, with multiple angles of approach, into a one-dimensional uphill slog.

Shorter, wider, quirky and less punishing than the East Course, the West has a more authentic set of Ross greens and bunkers and an equal number of top-shelf holes. These include the gorgeous par three 4th, with a nasty frontal depression in its putting surface, and the long, rolling par five 6th. The downhill par three 8th and mid-length 9th are also worthy of mention, while on the back nine the star attraction is the fabulous par four 13th, played across one sizeable ridge and up into a green atop the next one.

With its historic ambience, superb amenities and spectacular Tudor-style clubhouse, Oak Hill has become a landmark American country club and is the most celebrated championship venue in upstate New York. Although neither of its courses is quite in the Pinehurst No. 2 or Seminole league, both do compare very favorably to Ross’s other famous layouts. 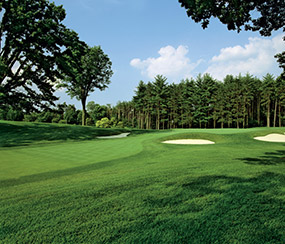