One of the world’s most recognizable championship venues, the Oakland Hills Country Club is located 20 miles north-west of Detroit, and was founded by businessman connected to the Ford Motor Company. It’s first course, the South Course, was designed by Donald Ross and opened in 1918. Ross later added a second track, but the South remains the club’s favored and most significant possession.

Built with championship play in mind, the South Course was always long and featured the most severely contoured set of greens Ross had ever built. Despite successfully hosting many major events, by 1950 the club felt it was no longer an adequate test of leading professionals and Robert Trent Jones was employed to modernize the layout. Jones strengthened the holes by growing thick rough, adding fairway bunkers and moving the greenside traps closer to the putting surfaces. Although he mostly left the tough green shapes alone, the fairways were narrowed considerably as width and strategic angles of attack were replaced by relentless difficulty and a desire to continually punish the slight spray.

Labeled a ‘monster’ by Ben Hogan in 1951, the new course proved popular with both the USGA and the PGA and continued to be tweaked and stretched in the subsequent decades. The opening holes are a great introduction to the challenge ahead; both the 1st and 2nd fairways are frighteningly tight and discourage a driver, even though each green was built to encourage a bold tee shot. The 1st green, in particular, is a superb piece of design with the putting surface leaning from back-to-front and featuring a central bowl and a wicked back tier all but impossible to hit from distance.

Another quality hole is the 5th, which is pinched tightly from the tee, cut by a creek and rises into a built-up target notorious for its large internal breaks. The hole marks the start of a fine stretch of golf, through to the 11th, with holes set across the best parts of the property. The climbing 8th and the side-hill 10th are both excellent tests while the 6th, with its superb Ross green, is still a fine medium-length par four despite Jones’s traps crowding the landing area and forcing a lay-up from the tee. The star attraction, however, is undoubtedly the 11th, which heads along a jumbled ridge but is best noted for a really cool approach shot uphill into a saddle green leaning steeply forwards and set atop a plateau. The finishing run is also solid, particularly the fantastic cross-sand approach into the 18th and the long par three 17th, which is played over a bunkered embankment that obscures your view of a wide green and its deadly right ledge.

In many ways the South Course at Oakland Hills is the ideal modern championship course as it is easily converted to a par of 70, has plenty of length and with modern green speeds the contours are tricky enough for even the cruelest tournament organizers. Any disappointment with the difficulty of the current set-up is tempered by the fact that the routing remains mostly as Ross intended and the greens are still very good. The club could easily remove some unnecessary bunkers and revert holes back to their original widths in order to create a better members course, but this is unlikely and, indeed, of all the classic layouts hardened for the sake of tournament prestige, this remains one of the most pleasing. 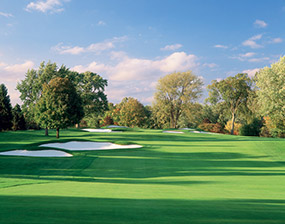