A private members club built along an isolated stretch of the south Georgia shoreline, Ocean Forest was designed by Rees Jones in 1995 and is part of a prestige housing development. As its name suggests, the course is both heavily wooded and close by the Atlantic coast but there is a distinct low country feel as the holes wind primarily through flat swamp ponds and saltwater marshes. Generally kept in mint condition, the course is really popular with good players as fairways are tight, the hazards well used and the small greens tend to be firm and quick.

Each of the nines head out to toward the Hampton River, the front looping back inland and the back winding its way toward, and briefly along, the ocean. Better holes include the short par four opener, pinched by a small lake, the narrow but strategic 2nd hole and the par three 5th, with its attractive river backdrop. Strong fours at the 7th, 8th, 12th and 16th are also good, as are a series of dangerous par fives and cross-marsh par threes at the 15th and 17th, the latter played toward the ocean and a massive green complex surrounded by sand. Concluding a fairly stern examination is the lone beachside hole, the 18th a rather unforgiving par four played straight along the coast.

In 2007 Rees Jones returned to Ocean Forest to give the track a major facelift, returfing his fairways with zoysia grass, clearing undergrowth to improve vistas, reshaping all his bunkers and adding a couple of hundred yards to the overall length of the course. This is now one of his more enjoyable layouts, with most of your clubs tested and the unusual mix of pines, palms, magnolia trees and live oaks creating a very pleasant environment for the game. 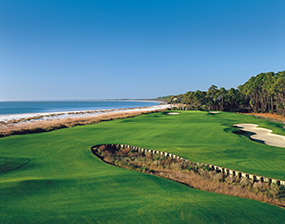