One of the lesser-known gems from the Golden Age of Golf Course Architecture, the Old Town Club is set immediately adjacent Wake Forest University and was founded by the same Tobacco tycoons who later donated the land upon which the Wake Forest campus was established.

Shortly before the onset of World War II, Charles and Mary Reynolds Babcock decided they wanted to add a private golf facility to an historic estate they controlled in Winston-Salem, known as Reynolda. Charles Babcock was a business associate of Augusta National Chairman Clifford Roberts, and was encouraged by Roberts to hire Perry Maxwell as his course designer. A former partner of Dr. Alister MacKenzie, Maxwell was consulting at Augusta during that period, and had clearly impressed with his work on the famed Georgian layout. He arrived at Reynolda in 1938, and was given 1,000 acres of farmland to consider for his golf holes. The parcel that Maxwell selected for Old Town was the making of the club, and in some ways provides an insight into the mindset of the Golden Age golf designer.

As with other historic old golf courses, the holes at Old Town remain precious today because they feel completely at one with their environment, as if naturally occurring and discovered rather than designed. To achieve such an outcome on a site with great natural movement requires a masterful routing, but moreso a willingness to defy convention and live with considerable quirk. It’s not just blind shots, uneven stances and double greens at Old Town, it’s the constant elevation change, the domed landing areas, the rising approach shots and falling drives, the use of broadly leaning plateaus and narrowing passages as well as the crossways/sideways integration of a meandering creek. There is almost too much to take in here, yet an obvious and undeniable sense of originality permeates throughout the layout. No two holes are remotely alike, and very few resemble any others from this classic era.

The Maxwell routing at Old Town remains a work of art, and the fact the course was open for play less than 12 months after he arrived on site speaks to the manner in which his holes fit snugly into the land, and how earthmoving was minimized. Interestingly, the layout features a number of small out and back loops, such as 1-3, 5-6, 9-11 and 13-14, which enabled the designer to overcome tight corners and force golfers to continually change their direction of play. His bold use of the terrain and natural features was inspired. As was his decision to build a double green for the par four 8th and par five 17th holes, set immediately beyond a narrow creek. In a confined area Maxwell was able to move golfers from penultimate greens to finishing tees on each nine, as well as route those from the 11th green to the 12th tee around the back of the immense target.

The double green is one of the many highlights here, along with the fun and sport of the holes that play toward it, one running along the side of a sizeable hill and the other coming right across the top of it. The adjacent finishing holes back to the clubhouse are similarly interesting, for the manner in which the 9th sneaks around another decent hill while the 18th plays over its crest. There are too many other great moments to list individually, and a tremendous deal of variety in the short, medium and longer holes. Figuring where to leave your ball off the tee is just as crucial as understanding which of Maxwell’s cunning greens can be approached aggressively and which require a little more caution. As a set they are every bit as impressive as his beloved greens at Prairie Dunes.

In recent years, every single hole at Old Town has been radically transformed through an ongoing restoration program headed by former Wake Forest student Bill Coore. Aside from the removal of hundreds of intruding trees, the restoration work has involved the enlargement of greens back to their original proportions and the rebuilding of Maxwell’s elegantly rugged bunkering. Coore has stated that the Maxwell design of Old Town Club “served as the cornerstone for my early understanding of what extraordinary golf architecture was all about” and one can see the influence in his own routing at places like Bandon Trails, Ozarks National, Warren Course and Shanqin Bay. Coore’s principal achievement here, along with longstanding Greens Chair Dunlop White III, has been to not only return the course to its glory days, but elevate the playing experience beyond what even Maxwell might have expected. Indeed, by doing so the restoration team has helped to increase awareness, and appreciation, industry wide of both Old Town the golf course, as well as Perry Maxwell the designer. 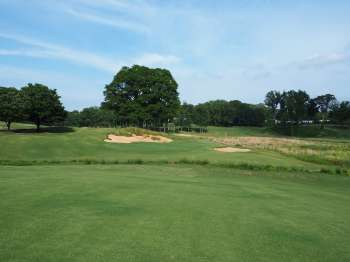 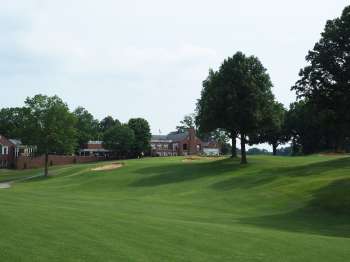 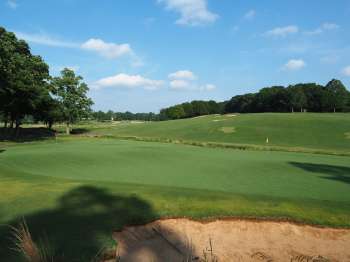 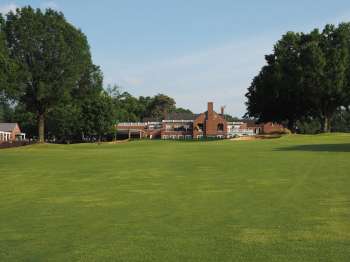 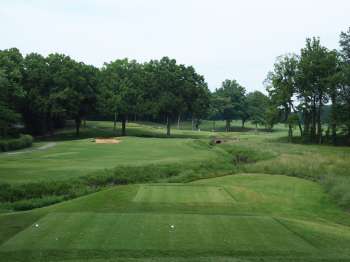