At one point America’s largest country club, Olympia Fields was the brainchild of prominent businessman Charles Beach, who in 1915 recognized the growing popularity of golf and a shortfall in quality courses around the Chicago area. His search for a suitable site upon which to develop a multi-course, mega-club brought him to a large tract of forested farmland 25 miles south of the city. Covered in flourishing oaks and a series of steep ridges and meandering streams, the land was ideal for golf. Beach, and his founding members, then purchased 670 acres and, incredibly, within just seven years had attracted more than a thousand members, completed four courses and built one of the grandest clubhouses in existence.

The 4th course opened in 1922 and was designed by dual British Open champion Willie Park Jr. Now referred to as the North Course, Park’s track was the centerpiece of Olympia Fields and when financial hardships forced the club to sell half its property during the 1940s, it was the land for this course, as well as an 18-hole composite from the three earlier courses, which was retained.

Designed with the same simple, strategic principles employed on his British masterpieces, the North Course has become a tighter driving course than initially intended but Park’s back-to-front green sites are still the dominant feature of the layout. The routing is also impressive, much of the course rolls softly across the terrain but a number of wonderfully natural holes were built amid the heavier undulations. Among the best is the par four 3rd, which plummets over a crest toward a hidden fairway, the approach then rising again into a gorgeous green site resting on a plateau and set beyond a creek and a group of imposing bunkers. The 14th also hits up high into a dangerous hilltop target, this time across a gully from a flatter lower ledge. Bending left around bunkers, the 11th is another wonderful hole, its fairway leaning right to encourage a bold left side drive and the approach played through sand to a green falling away at the back. The gently bending 2nd and the short par four 4th, with its large saucer shaped fairway leaving an obscured second shot for those unable to smash their drive beyond a distant ridge, are also fun to play. As are skillfully bunkered par threes at the 8th and 13th, along with the uphill approach into the two-shot 17th.

Aside from a number of back tees, the only significant change from Park’s plan is an awkward new par three, the 6th, which drops from an elevated tee down to an angled, tiered green that is quite out of character with the rest of the targets. The other blow for traditionalists and keen students of classic architecture is the unfortunate extension of a pond beside the 18th green. The finishing hole is still a terrific long par four but the pond now eats into the front of a steeply pitched target which leans forward and was clearly designed to allow weaker hitters to play a longer, running approach shot.

These changes aside, the North Course at Olympia Fields continues to provide a tremendous challenge and the club has done well to preserve a classic feel yet remain a relevant tournament venue. The course is probably a few outstanding holes away from being regarded among the greats of American golf, but this is one of the most pleasing championship layouts in the Midwest, and unquestionably among the top few in Illinois. 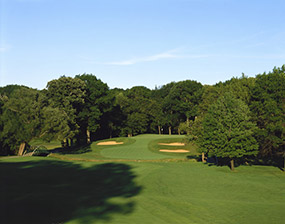