‘To be asked to build a golf course with Robert Tyre Jones Jr in his hometown is an honor and responsibility.’ Robert Trent Jones

Frustrated by crowds and the pace of play at the East Lake Golf Club, Bobby Jones and a handful of his associates decided to build their own private club within Metropolitan Atlanta. Like Augusta National, which was closed from May to October, the new Peachtree Golf Club was formed to allow them to golf in privacy and to let Mr. Jones enjoy a friendly round without spectators flocking to watch him play.

The search for appropriate ground upon which to build their new course brought the club’s founders to a 250-acre parcel of woodland in an undeveloped part of town. Like Augusta the site was a nursery and blessed with both broad golfing slopes and a stately mix of pine and hardwood. Once the land had been secured attention turned to design, Bobby Jones this time using Robert Trent Jones as his architectural collaborator. Trent Jones was very much guided by the design principals at Augusta National and similarly had Bobby hitting hundreds of balls during construction to test playing angles and shot values. The first nine holes were opened for play in October 1947, but soon afterwards Bobby Jones became crippled by a spinal disorder. Sadly he was unable to ever play his completed course.

Naturally there is a strong Augusta influence here, and comparisons between the courses are almost unavoidable. With the sun streaming through the tall pines, the azaleas and dogwoods in full bloom and flashed up sand bunkers dominating the flowing landscape, Peachtree has a similar aura of greatness, without having quite as many knockout holes. Trent Jones’s routing is most notable for the use of terrain and the number of elevated green sites and long runway teeing areas. Fairways tend to flow with the natural slopes but have few driving bunkers, while by contrast the putting surfaces are enormous, generally steep and often entirely surrounded by trouble.

Early highlights include the wonderfully bunkered opening hole and the multi-route par five 2nd, which first heads along a rumpled shelf before dropping quickly over a creek toward a split fairway and a green guarded by a further pond. A mound within the green and the buried elephants along the 3rd fairway are further standouts. As is the par three 4th, played over a pond to an elevated but shallow green leaning sharply to the front. On the inward nine the par five 10th falls and rises into a huge back-to-front target said to have been the largest in the USA when it was built. No less impressive, the 12th features a terrific uphill second shot into a beautiful target framed by sand while the 15th is memorable for an approach played across a deep gully from a side-hill lie.

Although few design changes have been made since Peachtree opened, over the years the site had become over-planted and as a result conditioning for a long time was scratchy. A recent restoration program has very successfully improved turf quality, particularly on the fairways, which were converted to a fine blade zoysia grass. Best of all, trees were cleared to open up vistas and restore the sense of spacious grandeur that the layout once enjoyed. Lost green areas were also restored and some back tees added, many positioned to force good players to shape tee balls around trees to keep it in play.

Though not as strategic as some other classics from this era, the fundamental design elements of the layout are sound and the setting, clubhouse and general ambience are all outstanding. Peachtree is a charming club and a round here truly is one of the genuine golfing pleasures of the south. 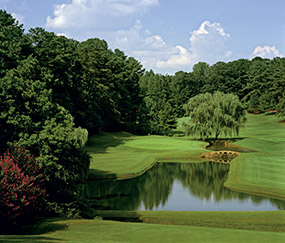