A short drive from Cypress Point, Pebble Beach is situated at the southern end of California’s Monterey Peninsula and was developed by business entrepreneur Samuel F.B. Morse. Morse first saw the site while acting as liquidator for a company wanting to offload its failed investment in the region, and felt that a golf course along the sea would help residential sales. He managed to convince the company to invest in the building of the Pebble Beach Golf Links and, when completed, purchased the course as part of a greater 18,000-acre Peninsula property. That property incorporated the vast Del Monte forest as well as further coastal land later used to build additional courses, such as Spyglass Hill, Monterey Peninsula Country Club and Cypress Point.

Pebble Beach occupies a site of unparalleled scenic beauty, its holes stretching along a rocky coastline and boasting wondrous views across Carmel Bay and Stillwater Cove. This was dream land for golf, yet the responsibility for designing the layout was given to local amateur players Jack Neville and Douglas Grant, who, with little experience, cleverly arranged the holes so that half could follow the continually curving bay.

Despite being well received, the course was constantly refined in the decade following its 1919 opening, most substantially by another amateur, H. Chandler Egan, who reshaped almost all the greens and bunkers prior to the 1929 US Amateur. Egan also moved the 1st and 10th tees, pushed the 16th green back into a natural depression and extended the fairway on the 9th out to the ocean, building a brilliant new target right beside the cliffs. Earlier, English architect Herbert Fowler had shifted the 18th tee onto a rocky outcrop and moved the putting surface back and along a seawall, transforming a tame par four into a mighty finishing five renowned the world over. Interestingly, during this period Dr. Alister MacKenzie also worked on the 8th and 13th greens, possibly to show Morse he was capable of handling the Cypress Point assignment.

Unlike Cypress and the early parts of Spyglass Hill, Pebble Beach is sheltered from the Pacific Ocean, and as a result it lacks wild sand dunes and natural fairway undulations. The layout also has a more formal, manicured appearance, although in its earliest guise things were more rugged and the greens were actually surrounded by vast sandy wastes. Targets have also shrunk over the years and are now small, circular and far from a standout feature. The most common criticism of this course, however, is that the inland holes are not as good as those along the sea. Better noncoastal holes such as the 2nd, 3rd, 14th, 15th and 16th are all fine, though each pales by comparison to the stunning offerings closer to the shore.

Pebble’s celebrated seaside holes are outrageously spectacular, the stretch from the 4th to the 10th without equal in this country. With the exception of the short 5th, a Jack Nicklaus hole built in the 1990s, this part of the course remains essentially unaltered from the Egan plan. The first real glamour hole is the par five 6th, an exciting challenge with great outlooks but played over a hill that is probably too steep for most golfers to handle with their fairway wood. There are no such issues on the 7th, arguably the game’s greatest dropkick par three, nor with the approach into the 8th green, which demands an awesome once-in-a-lifetime shot across a corner of the bay. Equally unforgettable are strong par fours at the 9th and 10th, each positioned alongside the sea and sloping more toward the ocean than is first apparent, their fairways and greens perfectly angled to reward those brave enough to crack a drive close to the water. The finale is also magnificent, particularly the mesmerizing par five 18th, which sweeps left along the shoreline and follows a coastal rock barrier all the way to its putting surface.

Although some criticize Pebble Beach for the disparity between its best and worst moments, the course has as many knockout holes as any in America, as well as a setting that rivals Cape Wickham in Australia as golf’s most beautiful. The layout itself is far from perfect and, unless playing at the right time of year, can also be frustratingly soft. These minor concerns, however, fail to take the shine off an extraordinary facility, and do little to diminish the broad global appeal of this famous resort. 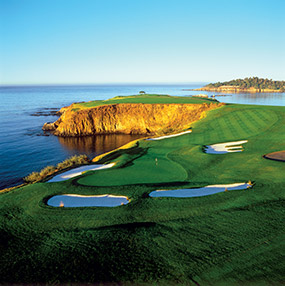 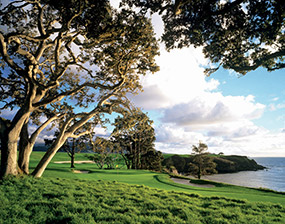 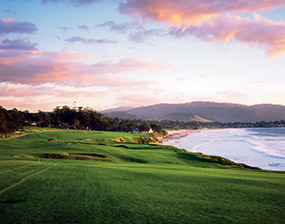 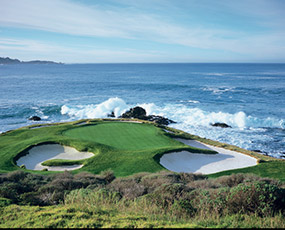