‘It is eighteen of the most exciting and memorable holes that I have ever built on one course.’ Pete Dye

Named in honor of its iconic creator, the Pete Dye Golf Club is built upon an abandoned 500-acre coal quarry north-east of Clarksburg, West Virginia. The club was founded by a mining family, who employed Pete Dye to shape their coal-scarred landscape into a quality high-end golf establishment. Course works began in 1978, but delays and disagreements meant the full 18-hole layout was not completed until 1995.

Set down within a dramatic tree-lined basin, the property itself features remnants of the mines as well as several deep pit lakes and a river that winds its way across the site. Although built to modern specifications, in a way this is a throw back to Dye’s earlier work as the course has a quiet rustic elegance and its generous playing areas are full of strategic subtleties. One of the more pleasing aspects of design is the abundance of short to medium length par fours, and the incentive they offer aggressive players to take risks. The mid-length 3rd, for instance, is wide enough to encourage driver from the tee, but the green is so devilishly contoured that a three-quarter pitch from an awkward angle can be next to impossible.

Making full use of the river and the site’s best undulations, the outward nine is littered with fascinating golf holes and some rather unique design. The 1st tee gets the golfing juices flowing immediately, its split-tier fairway snaking toward a partly obscured green and featuring a tempting lower level that bold golfers looking to make a fast start can attack. The par four 2nd then heads obliquely across the river, its fairway running alongside the water as it approaches a severe green benched between bunkers and deep collection areas. The other strong par four is the 9th, built with a central fairway bunker that splits its landing area and creates a tight right corridor for those after the best angle into the green. Following the river and gradually rising toward a target built atop an elevated bluff, the long 5th is another cool hole that seems to draw the golfer closer to trouble, as does the uphill 6th, a cunning short par four that follows a small creek. Here the driver zone does feel quite narrow, but the rewards for a strong tee shot are substantial as laying back leaves a tricky uphill pitch that is difficult to correctly judge.

By contrast, the back nine begins and ends with wonderful cross-river par fours but in between the golf is more open and less naturally dramatic. Notable holes include the shortish par five 15th, which bends around a lake, and the long, falling par three 16th. The audaciously shaped putting surface on the extreme 17th is also memorable. The undoubted standout, however, is the 18th, a mighty finishing four that heads along the water toward a green pressed against a fortified riverbank and partially hidden by large fairway contours.

Although some of the shaping at the Pete Dye Golf Club is a little overdone, Dye worked wonders on this property and did well to blend the softer, strategic holes with his more outrageous creations. A fitting tribute to a legendary architect, this memorable course can be both charming and cruel, lucid and at times difficult to completely understand; much like the designer himself. 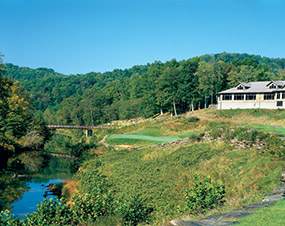