Recognized almost universally as the best golf course on the planet, Pine Valley is built among the sandy pinelands of southern New Jersey, around 20 miles south-east of Philadelphia. The course was founded, financed and primarily designed by hotelier George Crump, who first spotted this remarkable stretch of sand dunes while travelling by train with his golfing pals to Atlantic City. Crump purchased the land in 1912 and spent the next six years living at Pine Valley, searching for holes and scouring the site for the fairway and green locations necessary to build what he hoped would become the ultimate test of golf.

Throughout the design process Crump consulted extensively with leading golf course architects, including Harry Colt who had a large input into the final routing. Others like A.W. Tillinghast, George Thomas, Charles Blair Macdonald and Walter Travis also offered their suggestions. Although he was willing to listen to other peoples ideas, Crump had strong views on how his masterpiece should be arranged, insisting on keeping each hole isolated and ensuring the routing regularly changed direction. He also strongly believed that bad shots should be punished and it was this philosophy that dictated much of the Pine Valley design. Sadly Crump passed away suddenly in early 1918, with only fourteen of his holes opened for play. The remaining holes, 12 through 15, were built the following year by Hugh Wilson and William Flynn, who followed his intended plans.

The most penal and visually intimidating test imaginable, Pine Valley is carved through a forest of tall pines with its playing surfaces separated from each other by vast natural expanses of sand and scrub. Though the penalties for a missed shot are severe and absolute, the landing areas from the tee are actually more generous than its fearsome reputation would suggest. There is also a great deal more variety than one might imagine, with the stronger holes offset by a diverse set of par threes and six par fours under 400 yards. With almost perfect balance, the course provides an equal test of your short, mid and long iron ability, with half the greens demanding an aerial all-carry approach and the others open to a ball bouncing in from the front. The putting contours throughout the layout are quite breathtaking and despite the sheer peril of missing island targets like the 7th, 8th or 10th, your recovery prospects around any of the open greens are just as dire.

Pine Valley opens with a four-hole loop on the clubhouse side of a river that cuts across the property. Following a wonderful dogleg opener comes the incredible mid-length 2nd, notorious for its daunting approach played over a huge sand hazard cut into the side of a steep ledge. Waiting atop the ledge is an enormous green full of bulging contours, the target sloping sharply to the front and with vertical ridges running through its putting surface. The next jaw-dropper is the 235-yard par three 5th, played directly across the river and into a beautiful green complex benched into a hill. This was Harry Colt’s most significant contribution to the layout, as he was the one who suggested the green be pushed back into the hillside, enabling the lower loop of holes to link with those on an elevated ridge.

The remainder of the course is equally dramatic, with tee balls regularly careering across barren wastelands and approach shots played into some of the most frightening targets on earth. The most terrifying include the pushed-up par three 10th, fronted by the infamous Devil’s Asshole bunker, and the tiny pimple green on the par four 8th, which is protected by deep traps and usually approached with either a wedge or three-quarter pitch from an awkward downhill lie. It’s not just the short holes that terrorize, the par fives are both genuine three-shotters and dangerous, particularly the deadly 7th, which is cut by a 100-yard long wilderness area known as Hell’s Half-Acre. Perhaps the greatest hole of all is Crump’s beloved 13th, one of the finest two-shot tests in golf and a hole that he discovered midway through the construction process. Following a drive played across a crested ridge, the fairway turns left around a scrubby ravine leaving golfers with the option of either hitting directly over the hazard toward the immense target or playing more cautiously out to the open right side and trying to chip and putt for their par.

Despite its heroic qualities, the 13th is a genuine strategic test with multiple routes to the green. The same cannot be said of other holes, and for many the only lingering concerns they have with Pine Valley are the number of forced carries and the severe punishments dealt out to even the slightest mishit. What’s cool about the course, however, is just how good the individual holes are and the fact that, generally, the easier the shot the bigger the penalty for a mistake. About the only unremarkable hole is the short par four 12th, which houses a fine front-to-back green site but has unfortunately lost much of its tactical appeal thanks to tree growth along its left side. Trees have also changed the short 17th from a split fairway par four into a hole played through a single chute of pines. The other significant difference from the earliest version of the course is the reduction and tidying of some of the exposed waste areas, done primarily to aid with maintenance.

Despite these evolutionary adjustments, and a succession of high-priced, high-profile challengers, Pine Valley remains the benchmark for golf in America. The story behind its creation is one of both incredible vision and great tragedy, Crump’s passion and drive to build the perfect golf course inspiring a generation of architects and changing the game in this country forever. The tragedy, of course, was that the genius behind this astonishing club never got to finish the masterpiece himself, nor experience the acclaim that its success has rightfully generated. 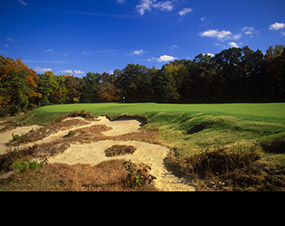 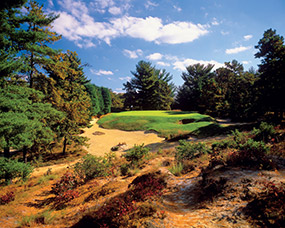 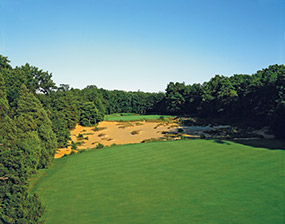 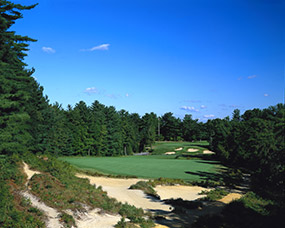