Significant for its role in helping Seth Raynor develop into a legitimate golf course architect, the Piping Rock Club was established in 1911 within the exclusive Long Island village of Locust Valley. Mixing polo and hunting with the emerging sport of golf, the club purchased a 340-acre meadow and hired Charles Blair Macdonald to oversee the creation of its golfing facilities. The tempestuous designer prepared routing plans for the course but became so frustrated at having to sacrifice prime land for horses that he instead sent Raynor to construct his holes.

Fresh from building the nearby National Golf Links, the pair again chose to include copies of Macdonald’s favorite European holes. Interestingly, the first ten had to be arranged in a large loop around a polo field and racetrack that were both later abandoned when golf’s popularity exploded. Remnants of the track remain visible in a sweeping ridge that cuts across the 7th fairway and directly in front of the par three 3rd, a tremendous Redan hole with its large rear-leaning green guarded by a ten-foot bunker. Another outstanding replica is the 9th, the first Biarritz hole that either designer attempted and a wonderful par three with a pronounced apron swale and massive putting surface. Also impressive is the sharply tiered target on the par five 6th and the Road hole-style green at the 8th, which has a more forgiving entrance than the original at St Andrews but a fearsome pot bunker in its front side and longer, trench-like traps along its rear.

By contrast from the spacious front nine, the back is tighter and heads partly into an elevated woodland. Better holes include the Alps-style 12th and the 300-yard 13th, which features a large, tiered green built atop an abrupt knoll and set almost 20 feet above the level of the fairway. The uphill approach into the away-sloping 16th green is also very good.

Piping Rock was the first course Macdonald and Raynor built after the National and it was also the first time they attempted to transpose the ideal hole concept onto an inland site. Many believe it was the success of these replica holes that emboldened Raynor to use them again on his later design projects. 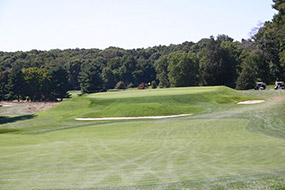 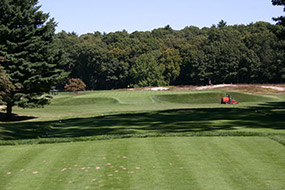