A genuine American treasure, the Prairie Dunes Country Club is located in the heart of central Kansas, but built among the sort of undulating sandhills that one would expect to find along the Scottish coastline. The club was founded by Emerson Carey, a prominent local golfer who discovered this natural wonderland five miles north-east of Hutchinson and immediately recognized its potential for great golf. In 1935 he commissioned renowned course architect Perry Maxwell to inspect the 480-acre property. Maxwell was apparently captivated by the exciting dune shapes and spent weeks on site before deciding how to arrange his course.

As far from a typical links environment as could be conceived, the site nevertheless retained a genuine links feel thanks to its exposed, sandy terrain and attractive dune structures covered in a dense weed and indigenous grass mix known here as ‘gunch’. The course was built using only horses, mules and wheelbarrows with the native topography carefully fashioned into formidable fairway and green shapes mostly by hand. Maxwell apparently routed eighteen holes for the club, but only nine had been built when the course opened for play in 1937. It took until 1957 for the full eighteen to finally open, Perry’s son Press adding the final nine holes after his father had passed away.

The original holes are spread through both nines and are mostly those nearest the clubhouse. There remains some debate as to whether Press Maxwell followed his father’s intended plan in completing the layout or discovered the additional holes himself. Regardless, he did a terrific job as the interplay between the holes works particularly well and the greens across the course are consistently contoured to an exceptionally high standard. Press’s better holes include the par three 4th, with its target cut on a dune ledge, and the tough par four 5th, usually played into the teeth of the wind. The 11th and 12th greens are also worth mentioning, the 12th for its fascinating internal contours and the 11th for a cruel hump that guards the center of the putting surface and kicks weaker balls either side and into trouble. His most outstanding hole, however, is the par four 16th, which turns through sand toward a skinny green that is angled to only accept approach shots from golfers placed perfectly within the dogleg.

Picking out Perry Maxwell highlights would involve descriptions of each of the holes he built. The 1st and 7th may seem relatively simple affairs, but genius greens elevates each into the seriously good category. The par three 2nd is another stunner, its green set diagonally into a dune and protected by slick breaks and deep frontal bunkering. His other short hole, the 10th, is played uphill over a sea of ‘gunch’ to a terrific target that falls on both sides. Outshining them all is the club’s signature hole, the 8th, which crosses a bumpy crest before rising toward a green built into a hill and sloping severely off the front. The beauty of the setting as well as the wild undulations within both fairway and green make this one of America’s best, and most intimidating, par fours.

The final two holes are also world-class, the 17th a superb reachable par five that tumbles along a narrowing fairway toward a small domed target built atop a knoll. Apparently modeled after the finisher at Crystal Downs, the 18th then heads along a densely vegetated dune ridge, the angle of its green meaning that those who hope to make a closing par need to take on the rubbish with their drive to ensure a decent approach shot angle.

Prairie Dunes has as many knockout holes as any course in the Midwest and presents all players with a strong and comprehensive examination of their golfing prowess. The club gets full marks for keeping their turf keen and their native roughs healthy and, aside from problems with the trees that cramp the 12th fairway, they have done a tremendous job preserving this wonderful Maxwell design. It is also worth noting that, unusually for a course of this quality, these caring custodians are happy to share their treasured layout with visiting golfers. Those who haven’t yet had the pleasure of a round here, therefore, should make immediate plans. It won’t disappoint. 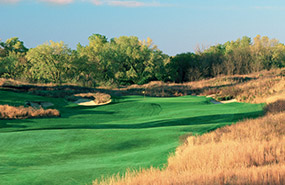 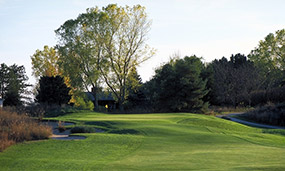