Built for the Princeville development on the north shore of Hawaii’s Kaua’i Island, the Prince Course was designed by Robert Trent Jones Jr and built atop lush tropical cliffs that tower 300 feet above Kauai’s picturesque Hanalei Bay. Cooled by Pacific breezes, the layout is one of Jones’ most scenic creations and offers golfers rare panoramic views of both the sea on one side and green volcanic mountains on the other.

Loaded with dramatic elevation change, the course is routed in a large loop and briefly skirts along coastal bluffs while also heading through dense valleys and across deep canyons and meandering creeks. Despite the obvious glamour, the course has issues with playability as the par threes are a little severe while a number of the longer holes are unnecessarily narrow from the tee. Greens are typically small, tiered and often built without safe areas to miss, meaning that the difficulty of the approach shot is often disproportionate to the quality of the drive.

The most interesting holes here tend to be those that are the most brutal, such as the signature par three 7th, which plays into the trade wind and requires a long carry across a massive canyon as surf crashes into an azure cove to your left. The 11th is another brutal high-wind par three, this time heading toward a narrow kidney-shaped target pressed against a densely vegetated ravine. Other holes of note include the tough, twisting opener, the par four 12th, plunging more than 100 feet along a slender valley, and the gorgeous 13th, split by a creek that crosses the fairway and then wraps around the side of the green.

It may seem unfair, but Trent Jones Jr courses tend to be measured in terms of their aesthetic values rather than their golfing substance. The Prince Course, with its incredible backdrop and glorious coastal views, is visually one of his most pleasing layouts, though it is hard to wholeheartedly endorse a course that has so many extreme challenges. 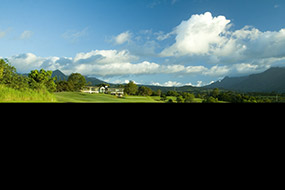