Set within a thousand year old federally protected juniper forest, Pronghorn is a mixed resort and residential development located a short drive northeast from the city of Bend. The estate was created in the early 2000s and feels more spacious than its 640 acres; owing to the enormous swathe of undeveloped arid wilderness that surrounds it. A four-mile long entrance drive helps to emphasize this sense of space and seclusion, and add to the anticipation for first-time visitors.

Along with a hotel and a host of high-end recreational facilities at Pronghorn is a public access Jack Nicklaus course and a stylish private layout designed by Tom Fazio. Where Nicklaus fashioned a difficult, narrow test from his elevated, rock-strewn landscape, Fazio was able to find more playable golfing corridors and build width and forgiveness into his holes. He was also blessed with some remarkable rock outcrops and lava caves, which he used to create one of the most interesting courses in central Oregon.

Fazio’s work here is notable for both the elegant manner in which his bunkers, greens and features were assembled, and the way in which he was able to align holes toward distant mountains or shape ground to accentuate the natural beauty of his high desert landscape. The use of small-scale movement is effective, as are the rugged, grass-faced bunkers that give the course its distinct character.

More so than even greens, tees, bunkers and lakes are volcanic rocks, canyons and cliffs that are all used prominently within the design, particularly on showstoppers like the 8th and 18th holes. While the 8th is a true one-off, the 18th is a superb interpretation of an-almost cliché par five finishing hole around water. These holes are usually too stoutly defended or too generously proportioned, but this one is perfect for its pop-up rocks, its waste bunkering alongside the lake, and an approach apron broad enough to enable any standard of golfer to finish with a flurry.

Unlike the 18th, there isn’t a hole anywhere quite like the par three 8th. With its green pressed against a sheer cliff wall, the tee shot is played across a canyon floor and guarded on both the left and right sides by volcanic caves. These ancient lava tubes are fascinating, and were apparently connected pre-construction to a larger cave structure beneath the green. Exploring the caves during a lull in the round is not only recommended, but encouraged by a club that now uses the area for special events and functions.

Of the remaining holes, our front nine favorites include the beautifully bunkered par five 2nd, the short, all-carry 4th and the strong par four 7th, whose green abuts an elongated rock wall. On the inward side, the partially obscured 12th is an interesting hole while the 17th is notable for its twin greens and impressive use of sand and rock.

On top of the individual highlight holes listed are a number of lovely Cascade Mountain views, superb turf conditions and a charming overall ambience. The Nicklaus course is also worth playing, and likely to be especially popular with highly skilled golfers. For the rest, the Fazio is both the more playable and the more enjoyable track at Pronghorn.

In Volume 3 of The Confidential Guide to Golf Courses, Tom Doak published that:

“I can’t imagine Jack Nicklaus was too happy that his client then turned around and spent the savings from the first eighteen to let Tom Fazio dynamite his way to a much more dramatic sister project. I would rank this course as a bit of a guilty pleasure; it is really much too opulent for my tastes, but the dramatic use of sandy expanses up against the lava rock is superb and the mountain vistas are well exploited in the routing. The greens add a great deal of difficulty to the course, too, but the contours feel a bit awkward and unnatural.” 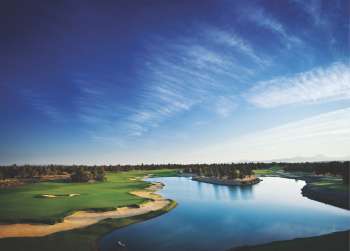 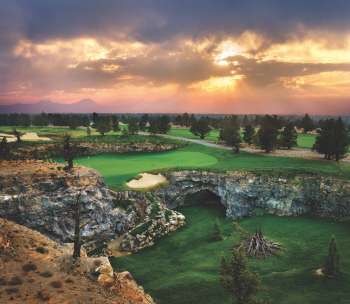