The most surprising inclusion on any golf course ranking list, Rich Harvest Links was created by wealthy computer entrepreneur Jerry Rich on vast farmlands he owned in Sugar Grove, west of Chicago. Apparently denied membership at the Augusta National Golf Club, Rich decided to create his own private course for friends and invited associates, designing and building three holes on his property in 1989 and extending this to eighteen holes ten years later.

Although the amenities here are first-class, Rich’s design and routing are poor and the construction mediocre. There is simply no logic to the sequence or arrangement of holes while the use of non-strategic split fairways is, at best, confusing. The course is also badly bunkered and horribly over treed, the likes of the 3rd and 13th among the most cramped golf holes anywhere on the planet. Both turn hard left through tall oaks, meaning that even if you fluke a fairway you’ll probably have to take the second shot straight over or around further trees. The 13th is so overcrowded that no grass will grow on the tees, synthetic turf being used instead (2nd picture). Anyone who can hit this fairway without bouncing off limbs is a seriously straight driver.

Unfortunately these holes aren’t the only black spots, par threes at the 4th and 14th are also ordinary while most of the longer holes are ineffective, particularly the 16th and 18th which have two tees and two distinct fairways that just happen to meet at the same green. The par five version of the split-par 16th is an awful driving hole, the tee shot marginally more appealing from the par four tees.

For the purposes of completing Planet Golf USA, Rich Harvest was as important to see as Pine Valley and Cypress Point as it helped provide the parameters within which all other golf courses in this book are assessed. The club itself is ultra-private, immaculate and surrounded by lavish facilities yet the course would struggle to break into Illinois’s Top 50 and is perhaps proof that red herrings exist on golf ranking lists. 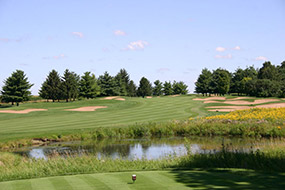 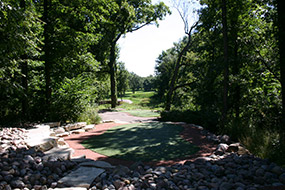 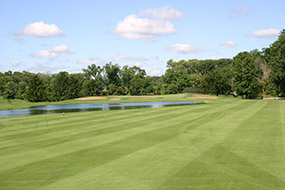 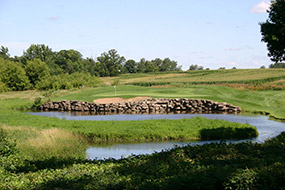