A beautiful country club in the Blue Ridge Mountains above Winston-Salem, Roaring Gap was formed back in the 1920s by a group of prominent local business leaders, including Leonard Tufts. The Tufts family had successfully established their Pinehurst Resort as a winter retreat for northern golfers, and the idea with Roaring Gap was to offer customers the option of remaining in North Carolina during the warmer months. It was Tufts who engaged Donald Ross to design the golf course here, and Tufts who was chiefly responsible for the construction of the 50-room inn that was to house their paying guests.

In its early years Roaring Gap was promoted as “Pinehurst of the Hills,” and until the Great Depression it was run as a partner property and managed by senior staff from the famous resort. The arrival of the Great Depression forced Pinehurst to abandon control over the facility, as well as plans for hundreds of additional guest rooms. Ultimately, it was the departure of Leonard Tufts and his Pinehurst team that transformed Roaring Gap, from a pay-for-play country club into one of the finest private golf facilities anywhere in the American mountains.

Set around 3,700 feet above sea level, the Roaring Gap routing is notable for the manner in which Donald Ross was able to carefully arrange his holes along a somewhat precarious upland property. There are some significant elevation changes here, as well as narrow valleys and areas where sheer drop offs or residential boundaries must have complicated his plans. The front nine is tightly arranged in an out-and-back loop through the woods, while the back traverses broader slopes and has a more expansive, communal feel. The variety of landforms and design on display throughout both nines is terrific.

Among early highlights are holes like the falling par four 5th, the push-up par three 6th and the wonderfully adventurous sidehill 7th and 8th. Equally impressive are the likes of the 4th, 9th and 12th, which occupy awkward ground but are elevated by some fascinating Donald Ross green complexes. The hillside off the 12th tee, for example, is really too severe, and the fairway too narrow, for any sort of strategic play, but the fun of turning across this large shoulder and hitting into an aggressively angled green is undeniable. Similarly, the previous hole is a par five that tumbles across magnificent rolling ground. The third shot here might not be the most interesting on the course but the first two are fantastic. As are longer adjoining holes at the 14th, 15th and 16th, as well as the charming short par four 17th, with its infinity outlook, and the closing par three 18th, played back toward an appropriately understated clubhouse.

As is often the case with courses of this vintage, there was a period when the fairways and greens at Roaring Gap had shrunk to such a degree as to make the holes almost unrecognizable from the Ross design. Thankfully, a restoration undertaken by Kris Spence has returned the original playing dimensions and reinstated sophisticated areas of short-grass around many of the steeply leaning green sites. The course not only looks a treat as a result, it plays perfectly for everyone other than the elite professional. Indeed, beyond the delightful Blue Ridge setting and the fun of the undulating inward side, the lasting memory of Roaring Gap is its simplicity and how glorious old-school courses like this can remind us that golf was once a less pretentious, and more joyful game. 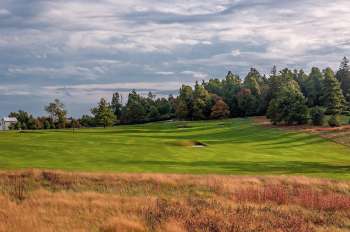 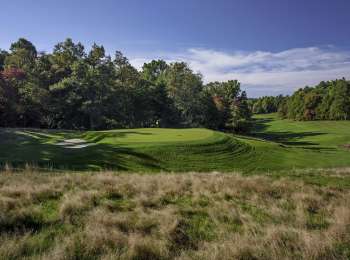 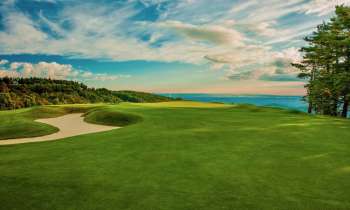