About the last state you think of when considering world-class golf, Montana is nonetheless an appealing place for development because of the many outdoor wonders that exist across its vast expanses. Over the last decade a number of high-end private golf and housing retreats have been formed to capitalize on growing interest in ranch life and the great outdoors. None are finer than the Rock Creek Cattle Company, outside Deer Lodge.

A working cattle farm, the Rock Creek site measures around 30,000 acres and was formally part of the historic Grant-Kohrs Ranch that once stretched nearly ten million acres across southwestern Montana. When designer Tom Doak arrived in the mid 2000s to route and build the development golf course, he was given the option to set holes anywhere on the property that he wanted. While tempted to use higher ground and start golf away from the central lodge, he ultimately arranged the course in a large single loop nearer to Rock Creek, in order to maintain a sense of intimacy with the development and ensure the golf course was walkable.

Doak’s course is defined by the diversity of its landscapes and the many outlooks that provide pleasant respite from the golf. Full of dramatic undulations, the layout hops from a subtle vale through a series of undulating hills and from down near the creek to rise gloriously across a hillside and back again, all the while accompanied by almost constant Big Sky panoramas.

Unlike Doak’s more famous sandy, seaside courses, here in Montana the ground was mostly rock and the routing puzzle quite complex. Even ignoring the steeper terrain there was still plenty of elevation change among the various sections and areas where pop-up mounds or hills appeared to interrupt his sequence of holes. What Doak did wonderfully well with these landforms, was incorporate them into his design by forcing golfers to either hit over, around or through them, but rarely in the same manner and rarely with unreasonable expectations of success.

The variety on display across Rock Creek is impressive, as are some of the individual features and holes. Those down by the creek, such as the par five 18th and the short 8th and 17th, enjoy the pick of the playable golf contours and are beautifully designed. The same is true of elevated gems like consecutive par threes at the 12th and 13th, which occupy far more dramatic ground but remain fun and manageable for a range of golfers. Elsewhere, the twisting, turning par five 10th and strong par four 7th, which plays blindly across one rocky bump and then through a pair of converging dune ridges, standout as unforgettable.

With its lovely creek and streams, its rolling hills and glorious mountain views, abundant wildlife and luxurious non-golf attractions, Rock Creek is one of the more appealing seasonal establishments in the entire American northwest. In some ways the golf here is a bonus. Tom Doak has built some remarkable courses during his career, but few away from the sea that are as varied or as pleasing as this one. 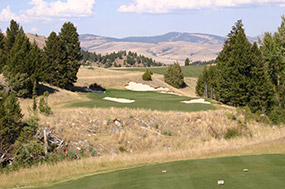 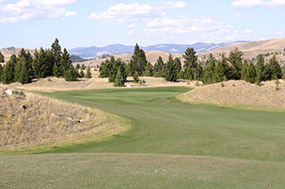 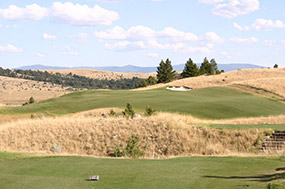