The Sahalee Country Club was founded by members of two separate Seattle golf clubs, who were determined to build a championship caliber course and in 1967 purchased 180 acres of rolling ground on the Sammamish Plateau, half an hour east of the city. Architect Ted Robinson was selected as course designer, and given the task of crafting 27 holes through giant cedar and Douglas-fir trees native to this part of the continent.

Known for its magnificent evergreens and interesting ground gradients, the South/North tournament course is compactly routed and incredibly narrow, with tall timber cramping fairway corridors and often blocking approach shots for those only slightly off-center from the tee. The opening par four is an appropriate, though difficult, introduction to the challenge, trees pinching its fairway so tightly that finding the short grass with anything beyond a 4-iron is next to impossible. The green, like many here, is small and flanked by sand. The next few are equally cramped, but later holes at least offer golfers the opportunity to drive with their longer sticks. Most of the better moments come through the back (North) nine, which boasts the most pronounced ground contours and tends to have a little more width from the tee. It begins with a beautiful par four that heads across a saddled crest and then down to a peninsula target cut into a pond. The rising 15th fairway also crosses a narrow crest, the hole followed by a very effective mid-length par four, its small green set beyond a deep valley and either approached with a mid-iron from a level lie or with a blind wedge from down in the depression.

Although the Robinson routing remains unaltered here, in 1996 Rees Jones began an extensive program of redesign and modernization, stretching holes and altering a number of green and bunker shapes. His work has clearly made Sahalee an even more demanding tournament test, though ultimately it is still too tight to be considered top shelf. 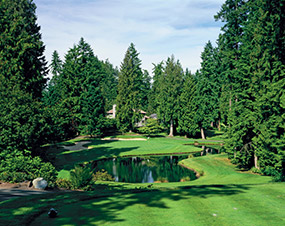