A two-hour drive from downtown Las Vegas, the Sand Hollow Resort in southern Utah is a 27-hole facility on the boundary of a popular state park. The region is renowned for its dusty red sand dunes and dramatic rock formations, each incorporated by designers John Fought and Andy Staples into both their nine-hole Links Course and 18-hole Championship test.

Opening in 2008, Sand Hollow was acclaimed almost instantly for the spectacular nature of its desert design, and the fact that much of the back nine was able to dangle precariously along the edge of a cliff. Fought and Staples deserve credit for an excellent routing arrangement, and for injecting variety into their holes whilst retaining a genuine sense of strategy, despite some steep pieces of property. Fairways are generally broad and the greens are typically arranged to favor intelligent golfers approaching from a certain side of the fairway. Most pleasingly, the course itself was constructed using the existing ground conditions, with minimal earthworks and bunkering that seems to fit snugly within the terrain and emerge from the native sagebrush and sand.

Set to the east of a central clubhouse, the opening nine occupies a broad, high desert plateau, and features a closely bunched collection of understated holes arranged within the borders of a planned residential precinct. Several rock outcrops provide a nice contrast to the undulating ground, and small central bunkers often complicate the approach by forcing golfers to either tack around or carry a hazard they are desperate to avoid.

Despite the nice ground and fun holes, without doubt the more dramatic back nine is the star attraction at Sand Hollow. Arranged in a large single loop to the west, the inward half is routed partly alongside a spectacular rocky clifftop. Each of the 12th, 13th and 15th holes are set directly on the edge of the abyss and worthy of closer inspection.

Built along a ledge and wedged between a high cliff to your right and an abrupt precipice to your left, the 12th runs uphill and is the tightest and toughest two-shot hole on the course. The next is a driveable par four with a narrowing fairway and clever central bunker that forces considerable risk from those looking to set up a simple birdie. From a birdie chance to a brutal par, the 14th is then the longest two-shotter on the course and blind from the very back tees. Mercifully, the downhill approach is more forgiving than the 12th and bunkered to allow long, chasing approach shots to bounce up onto the green. Concluding a thrilling loop is the par three 15th, which from some tees plays directly across a canyon from one rim to a green atop another. It won’t attract the same attention as earlier holes, but the par five 17th is also memorable for both a desert wash that cuts across its fairway and an influential central bunker.

A quite unexpected find given its locale, Sand Hollow is an original and the sort of exciting layout that most green fee paying golfers are sure to enjoy. Not only does the routing use the natural drama to its full extent, the design is equal to the setting and walkable enough to lend itself easily to repeat play. There aren’t many courses near Las Vegas with these same credentials, making this one well worth the detour for those planning to bring golf clubs on their next trip to Sin City. 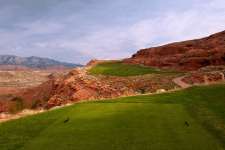 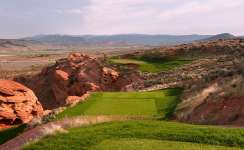 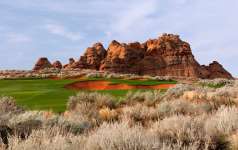