Located near the small town of Chardon, 30 miles east of Cleveland, the Sand Ridge Golf Club was founded by the chairman of a large industrial sand company, who employed Tom Fazio to build him a course right beside his main Ohio quarry. Although the 370-acre property made available for the layout was relatively flat and infertile, it did include a large, attractive wetland area and Fazio was given the freedom to use as much of the neighboring sand as required to build his golf holes.

Routing his front nine through the site’s mature hardwoods, Fazio then arranged his more open back nine in a large loop around the protected wetlands. The abundant available sand allowed him to ensure the highest possible turf standards and to shape and create hazards and fairway contours as desired. Some of the better holes include the twin-target 5th and the eye-catching par three 8th, played across a pond and into an angled green. The 11th and 13th are both strong and well conceived par fours and the finishing stretch, which most directly incorporates the wetlands, provides a spectacular end to the round. Bending left around a lake, the mid-length 16th is a clever hole that offers multiple options of attack while the 17th is a long but appealing one-shot hole that plays across part of the marsh.

Unfortunately, the rest of the course is fairly uninspiring. Most of the shaping is well handled, but a number of holes are unnecessarily over bunkered and the continual use of gently crested fairways does tend to get a little repetitive. In 2006 the Sand Ridge Golf Club merged with the older Mayfield Country Club, and while the amalgamated entity now has access to two very pleasant courses, neither is a genuine Top 100 candidate. 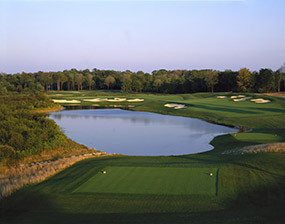