The story of the founding of Bandon Dunes in Oregon has been often told. Chicago businessman Mike Keiser fell in love with links golf on a trip abroad, and decided to search the United States for the ideal site to introduce this version of golf back into the American mainstream. He succeeded spectacularly. Interestingly, Bandon was discovered after Keiser engaged a scout to search the West Coast for a sandy site with diversity of environment and a standalone body of water, preferably the ocean. That same formula was followed on subsequent developments, such as at Cabot in Canada and Barnbougle in Australia. It was far from the case at his next project, however, the Sand Valley Golf Resort near the small central Wisconsin town of Nekoosa.

Wisconsin has no ocean, and this part of the state no large body of water, save for Petenwell Lake a few miles to the west of the development site. Pre-Keiser, it also had little environmental variety. When Keiser first saw the 1,700-acre Sand Valley property, it was mostly a dense forest of row planted fir trees. What it did have, quite literally in spades, was sand. Up to 200 feet deep in places, it was this sand that attracted Keiser’s attention, along with the not insignificant matter of proximity to major population centers like Chicago, Minneapolis and Milwaukee.

Save for the ocean, Sand Valley really does have all the ingredients necessary to rival Keiser’s earlier creations – including world-class design. The resort’s first course was created by his long-time collaborators, Bill Coore and Ben Crenshaw, whose property is comprised of a series of tumbling sand ridges and valleys, along with one abrupt dune formation, nicknamed “The Volcano”, from where each of the nines start and finish.

The view from atop this prominent hill is tremendous, and gives a sense of the adventure laid out below. The front nine tends to occupy the more dramatic terrain, and features holes that both rise steadily and fall dramatically, as well as others that cross from valley into ridge and back again. There is great variety throughout, starting with an excellent mid-length par four around a sculptured sand waste through to a brilliant set of par threes, up, down and along the undulations. The 3rd is particularly notable for an expertly positioned high right shoulder that either feeds accurate balls nearer to the pin or pushes weaker shots away. The falling 5th and uphill 8th complement the longer 3rd and provide the sort of short hole variety that purists so often bemoan as missing in modern design.

Elsewhere on the outward half, consecutive long holes at the 6th and 7th standout for their generous width and for the use of enormous sand hazards to dictate the playing strategy. The green on the 6th hole is remarkable for an elongated front section, which is crowned and falls away to a narrowing, sunken rear bowl. Were this green a hundred years old it would be much studied and oft copied. Concluding the opening nine is the short par four 9th, less strategic than other 300-yarders by this design team but built with a sharply angled green set back into the base of the Volcano.

Although enjoying the same playing width and sporty design as the front nine, the back has a different feel as it features softer topography and a loop of holes cut through a broad valley and separated attractively by regenerated heathland-type vegetation. These low-growing native plants are especially prominent on the one-shot 14th and the short, multiroute par five 12th. The closing holes are a real highlight as well. The 17th is an incredible par three played into a giant dell green site, while the 18th is a prodigious par five with a fascinating green site and endless strategic choices from the tee.

Inevitably, whenever Mike Keiser reveals a new golf development the first question asked, is ‘how many courses will there be?’ So it was with Sand Valley, and shortly after the team broke ground on this course it was announced that David McLay Kidd would add a second, Mammoth Dunes, soon after. The order was different, but Bandon Dunes of the Midwest immediately sprang to mind. There may be as many as four or five courses here eventually, but the first alone has made Sand Valley a destination of great appeal. 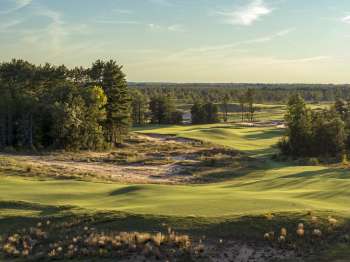 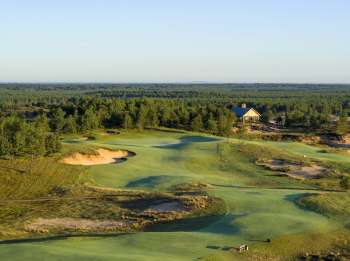 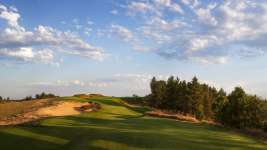