Sea Island is a luxury resort destination located on the Georgia coast, at the southern end of St. Simons Island. Golf at the resort dates back to the 1927 opening of a nine-hole Walter Travis course, which was followed in 1928 by an additional nine holes by English architects Harry Colt and Charles Alison. The resort later added two further nines, but it was not until the 1990s that any attempt was made to tie the four separate courses together into two full-length and cohesive layouts.

Rees Jones was hired to rework the inland holes into the Plantation Course and Tom Fazio was given the plum job of upgrading the coastal Colt/Alison holes and rearranging another nine into a ‘new’ 18-hole Seaside layout. Fazio and his team worked first on the nature of the test, removing hundreds of trees to create a windswept feel and building small dunes and exposed sandy wastes to give the course a more rugged appearance. They also rebuilt tees, fairways, bunkers and greens. While the site is essentially flat, the holes cut attractively through tidal marsh areas and, on the back nine, briefly skirt the Intracoastal Waterway that flows from Maine to Miami.

Although the back nine retains much of the original Colt/Alison routing, particularly from the 10th to the 13th, the front nine was radically changed. Fazio built a number of strong holes like the 4th and 5th, which bend almost 90 degrees around wetlands, but generally struggled to find a strategic balance between testing long hitters and keeping angles relevant for the average golfer. Bigger hitters on the 8th and 15th, for instance, have an easy carry over sand into wide areas but shorter players are offered little inducement to flirt with danger. The design on several other holes encourages play away from fairway hazards. This is definitely not the case on the 13th, an original Colt/Alison gem that plays obliquely across and then along a marshland and rewards an aggressive drive close to trouble with a superior angle of approach.

This is a beautiful setting for a golf course and the resort itself is rather special, but the flat terrain and lack of interesting architecture is likely to leave connoisseurs a little unimpressed. 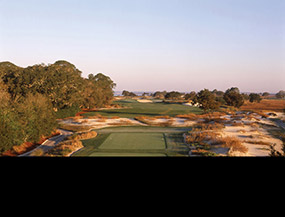