The following course review of the Silvies Valley Ranch appears in the new edition of Planet Golf USA (2020).

Established in the 1880s, the Silvies Valley Ranch covers 140,000 acres of meadow, mountain and pine forestland between the small eastern Oregon towns of John Day and Burns. Though the ranch has a colorful history spanning many families and many decades, it was largely in decline until 2007 when purchased by Dr. Scott Campbell, a veterinarian with strong roots to the region and a successful history of entrepreneurship.

What Campbell and his family saw in Silvies Valley was not just a livestock ranch, but the potential for an enormous eco-tourism and outdoor recreation facility, that could provide much needed social and economic stimulus to the district. Their first priority was to return Silvies to a working cattle ranch, and to then breed a hybrid American Ranch Goat capable of both fireproofing the property whilst enabling sensitive environmental restoration to take place. As it turns out; the goats also make excellent caddies.

Without question the golfing elements that have put Silvies Valley in the spotlight are the reversible nature of its primary golf course, and the fact that one of its par three tracks, known as McVeigh’s Gauntlet, uses these local goats as caddies. Neither was part of Campbell’s initial vision for Silvies, but each highlights his willingness to take risks with this ambitious project, and to challenge establish golfing traditions. The goats are both worthy of mention and a memorable part of the overall golf experience, but far from the primary attraction here.

The stars at Silvies are undoubtedly the Craddock and Hankins courses, named in honor of pioneering early settlers, and conceived by designer Dan Hixson to be played in reverse on alternate days. Hixson’s reversible concept was completely foreign to America when first suggested, but embraced by Dr. Campbell for its innovation, originality and sustainable use of land and resources. Their construction began in 2009, several years before Forest Dunes in Michigan would consider its own reversible layout.

Due to the remoteness of the ranch and the fastidious, disciplined nature of the developer, the main courses at Silvies took many years to build and did not open until 2018. Unlike The Loop at Forest Dunes, the topography here is so undulating that the two courses only share half of their greens, with the other half custom built to serve either the clockwise Craddock or the counterclockwise Hankins layout.

By focusing less on strictly interchangeable golfing corridors, and more on creating two exciting courses played largely over the same parcel of land, Hixson was able to inject more drama into his golf and to add standalone highlight holes on each course. The par threes on the Hankins, for example, are all spectacular but not used in any way on the Craddock. The downhill 2nd hole and outlooks beyond each of the 7th and 15th greens showcase the rugged beauty of the vast Silvies valley. The ability to find such standouts, and then figure a way to accommodate adjacent holes in the opposite direction, is the mark of a talented designer. As is the ability to carefully craft interesting greens and bunkers that work no matter the direction of play.

Although largely equal in terms of overall quality, the Hankins and Craddock layouts have their own personalities. The opening holes on Hankins and the closing sequence on the Craddock occupy an open meadow, but the rest are set between a series of strong, elongated ridges. The valleys beneath these abrupt ridges are ideal for golf. Importantly, they zigzag acutely meaning that greens played in reverse are often approached with only a 45–degree change of angle, which helped Hixson create such a playable set of dual-targets.

Aside from the short holes, the pick of the Hankins includes the downhill 1st and the strong 16th, as well as the long, elevated views from the par five 14th and medium-length 17th. While the Craddock course doesn’t quite hit the same highs as the Hankins, in some ways it presents a more consistent experience across all 18 holes. The par five 18th on Hankins is well used in reverse as an uphill starting hole on the Craddock, as are the par four 2nd and 17th holes, which play into the most impressive shared–green complexes on the property. Also noteworthy are the plunging par three 7th, where golfers can bounce their tee shot in from the high left side, and the narrowing, driveable 15th.

Along with the full layouts at Silvies Valley Ranch are another two short courses, a practice facility, five-star lodge, superb dining, a spa and selection of outdoor activities. Unlike Bandon on the coast, this is about more than just golf and may represent Oregon’s new frontier for the adventurous holidaymaker. Our game takes itself too seriously at times, and Silvies should act as a reminder that golf can be played in all sorts of conditions and all manner of formats; and that ultimately the mark of a successful golf course is not how highly it ranks in a magazine, but how enjoyable the experience is for its guests. We doubt that many leave this place disappointed. 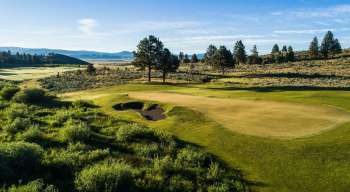 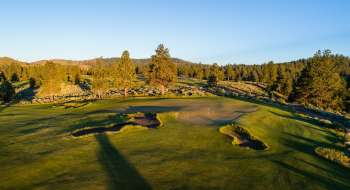 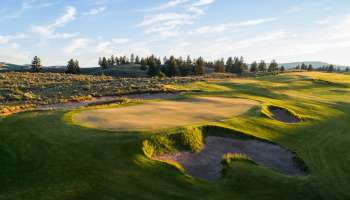