Despite its relative youth, the story of the Streamsong Resort is already well known throughout golfing circles. The resort was conceived and developed by The Mosaic Company, America’s largest producer of phosphate fertilizer, as a means of reclaiming a mine site in central Florida for the purposes of recreation. That site is set in a somewhat secluded corner of Polk County many miles from the coastline but with an abundance of the precise ingredients necessary for great golf, sand and undulation.

Aside from the fact that sandy, undulating sites in Florida are rare, what’s most unique about Streamsong are the processes of design as well as the process of reclamation. The area where both Blue and Red Courses were built was comprised, mostly, of a series of dune ridges created by mining spoil many decades earlier. These ridges, as well as the land between, are essentially pure sand, left on the ground once the phosphate had been dug out and removed. As mining pits evolved over years to appear as naturally forming lakes and ponds, so too were the dunes naturalized by father time. Native ground vegetation sprung up to stabilize the structures and ultimately help persuade the developer of their suitability for links golf.

Once a decision was made by management to reclaim the area for recreation and erect a golf resort on the site, the design decision became crucial. For a sandy, linkslike site to compete with a Bandon Dunes on the West Coast or the many great offerings in Scotland, Ireland and England, the golf would need to be world-class. Enter Tom Doak and Bill Coore, the most acclaimed course designers of the modern era. Doak and Coore have several courses in close proximity around the world but had never worked together on a routing before this project. Interestingly, the Blue and Red courses were named for the color pens used to delineate holes on their collaborative layout plan.

Once the routings were finalized, Doak chose to design the Blue layout and Coore the Red, in part because the opening sequence of holes occupied land that had not yet been reclaimed from the mining operations. He had more flexibility, therefore, to craft, or at least suggest, how some of his landforms were created. Doak’s Blue Course land, by contrast, was more established and his holes set mostly through the interior of the property.

As much as the subtle stylistic differences between the two minimalist designers, what separates the courses at Streamsong are the landforms. Coore’s Red Course features a more attractive set of sand dunes and more abrupt elevation changes around the periphery. Doak’s course approaches a couple of large dunes but generally has softer external shapes and a more intimate routing, with holes doubling back more frequently into communal green and tee areas. His opening tee is placed atop the tallest dune on the property, from where you can see most of the 36 holes as well as the principal spoil lake and clubhouse. It’s an exciting view, if somewhat taxing start to the round.

If beauty and the aesthetic framing of a hole matters in golf, and surely it does, then Coore unquestionably had the pick of the sites at Streamsong. Both he and Doak were able to incorporate an heroic par three across the chief spoil lake into their layouts, but Coore was also able to set a number of his holes between or beneath a series of densely vegetated sand hills. Importantly he used these landforms gloriously. There are shades of Barnbougle Lost Farm, Shanqin Bay and Friar’s Head across the layout, but a ton of originality as well.

The opening sequence is particularly strong and very difficult to pick fault with. Some find the uphill opener a little challenging as a starting hole and the fairway dimensions on the 3rd a touch awkward but the rest is quite exceptional. The small bunker short of the 2nd green is perfectly positioned to dictate the strategy for anyone hitting a decent drive down the fairway. The short par four 4th strongly resembles the 2nd hole at Lost Farm in Australia, with a more attractive backdrop and another equally brilliant green site that forces golfers to play down one side of the fairway or the other according to pin position. The 5th then bends around a lake and is a hole that might have been like thousands of others in Florida had Coore not incorporated a couple of bumps short of the green so cleverly into his playing strategy. Drive near the lake and these bumps don’t affect your second shot, but bail away too safely and you either hit your approach nearer the water or over the bumps into an area you can’t entirely see.

After the par three 6th hole, which returns play to near the starting point, the rest of the Red Course is arranged in a large loop primarily around the exterior of the property. The highlight holes are quite apparent, and include the par five 7th, with another bump cut into the side of its green to complicate play for those playing too conservatively, the rising short par four 9th and the beautifully bunkered mid-length 17th, its angled fairway protected by a monster sand trap that must be flirted with in order to set up the best view and angle into the green.

The other obvious showstopper is the long par three 16th, a tribute to the famous Biarritz at Yale in Connecticut. Like the 9th at Yale the tee shot here is across a pond and the green features a deep depression through its middle, the chief difference being that this central swale is very much pinable. With Doak’s wonderful par three 7th set immediately to the south and played over the same pond, this is certainly the most photogenic part of the Streamsong experience and both holes do the area justice. Golfers who flub their tee shot on either hole must yearn to return and play the courses again.

As one would expect of a Coore & Crenshaw golf course, Streamsong Red is noted for not only its outstanding individual holes but also the cohesive manner in which all 18 seem to tie together. The longer holes through the early part of the back nine lack the drama and raw appeal of some of the standouts, but there is a clear and apparent sense of belonging and they help ensure a thorough examination of your game. Coore’s greens are adventurous and busy, and often built with distinct pinable sections. Unlike Doak’s next door, however, he preferred to err on the side of making his targets receptive and gave golfers room to avoid the more severe contours.

Despite the abundance of sand and dunes at Streamsong, this is still a distance behind some of the best Coore & Crenshaw’s sites such as Cabot Cliffs, Friar’s Head, Lost Farm and Sand Hills. The fact the course is even spoken in the same breath indicates just how sophisticated the design is here, and how much fun the golf course is to play. Winter, spring, summer or fall this is the course we would most strongly recommend to golfers in all of Florida. 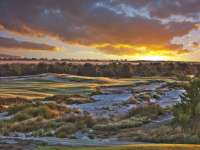 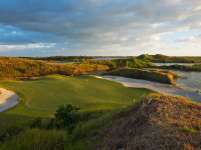