The small Tennessee town of South Pittsburg is about the last place one would expect to find a genuine game changer. Yet here on a flood prone meadow half an hour west of Chattanooga lays Sweetens Cove, arguably the most exciting, and influential, nine-hole course to open in America since Prairie Dunes debuted its Perry Maxwell holes back in the 1930s.

Defying what we have come to understand destination golf to represent, the backstory of the Sweetens Cove development is quite fascinating. It began in 2011, when a concrete company who owned the 9-hole Sequatchie Valley Country Club engaged design partners Rob Collins and Tad King to completely overhaul their property. The company had plans to create a golf and sporting club but as construction neared its conclusion a dispute between controlling siblings led them to abandon the project, and offer the land up for lease. Collins, a local Tennessean, faced a pivotal decision, walk away from everything he and partner King had done on the site or take ownership and try to finish the golf course himself.

In hindsight there was no real decision to make, as they had poured too much of their creative passions into this project to walk away. Collins and a finance partner took control of the almost-finished course in early 2014 and raised the capital necessary to put sand in bunkers, tidy up the maintenance and essentially get the holes ready for play. The investment needed was not insignificant, and for a few years any sort of return looked forlorn. Things began to change in 2017, however, when visits from course raters, writers and industry influencers gave birth to the cult of Sweetens Cove. The profitability of the business has been improving ever since.

What attracts golfers to this place is the unadulterated fun of the design, and the adventure of trying to figure out whether to use or avoid the rowdy ground contours. Incredibly, there was only a foot of elevation across much of this property so every bump, hump, swale and soft ridge was crafted by hand, and from the imagination of the design team. There is more than a hint of Mike Strantz in the daring and unconventional nature of the work, particularly around the greens. Most are pushed up and protected by steep fronts, sleepered pot bunkers or sharply falling wings. Several actually feel like double greens, such is the scale and character change from one pinable section to another. GIR’s are really only a part of the equation here, as being on the wrong side of the green can lead to some of the wildest double breaking putts you’ll ever experience.

Aside from creative green complexes, it’s the design temptations presented on virtually every hole that make this course so popular, and so easy to play over and over again. You can push for birdie and gamble anywhere, but there is always a very clear, conservative path that the designers almost dare you to ignore. The most obvious example comes at the sub 300-yard 5th, a serious temptress whose green is relatively comfortable to approach with a wedge in your hand, yet so enticing from the tee as to constantly lure you into an aggressive, dangerous drive. If taking a Mulligan were a genuine golf rule, it would probably be adopted with regularity here.

The same is true of the 7th, which is narrower and nastier yet somehow equally tempting from the tee. Its crowned putting surface and steep run offs would not be out of place at Pinehurst. Other pure golf highlights include outrageously contoured greens at the 3rd and 4th, the latter being essentially an ‘in-play’ Himalayas, and the simple strategy of the left side or right side par four 2nd. The short 9th is an attractive finish and noted for its steeply leaning green, which is set at the base of a hill and often tackled with an audience watching.

Far removed from the luxurious, multi-course resorts featured in this book, Sweetens Cove works despite having only nine holes, few facilities and as modest an arrival experience as is imaginable. It works because it doesn’t take itself too seriously, and because once you step onto the first tee the game of golf is stripped back and simplified to nothing more than having to hit fun shots into fun targets. It’s not uncommon for golfers to book one loop and end up playing three or more, and to be forced from the course by darkness. Indeed, the only concern those who enjoy this sort of golf will likely have with Sweetens Cove is that it isn’t closer to home. 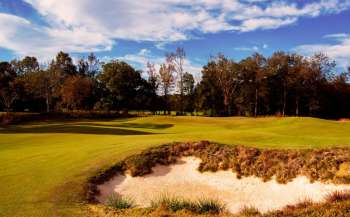 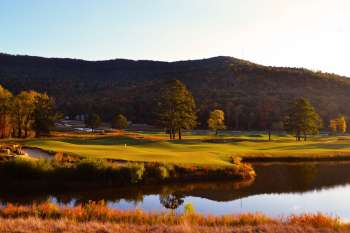 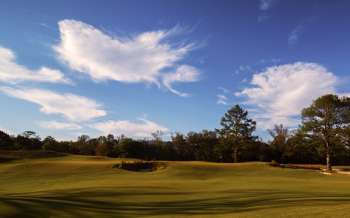 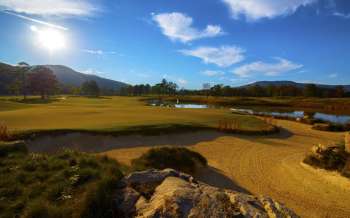