Opening in 1989, the Sycamore Hills golf course was designed by Jack Nicklaus as part of a residential development on the western outskirts of Fort Wayne, Indiana. Built on a large rural estate, Nicklaus fortunately had enough space to keep home sites mostly away from the golf and was further blessed with a fabulous collection of mature sycamore, oak and spruce trees and a naturally twisting river that ran through the property.

Water is a dominant feature throughout the course with several large lakes and a number of holes routed along or across the river. The designer further protected par by building small, undulating greens that are often shallow, set across play and fronted by hazards, which force golfers into an aerial approach route. The best holes tend to be the strong par fours, starting with the strategic 6th, which crosses water twice and features a clever green site that favors aggressive drivers. On the back nine quality fours include the tight 10th and the 16th, which bends into a raised green set beyond the river. The 18th is also good as it first hugs the river and then heads across the hazard toward a nice target framed by flowers. Unfortunately the par threes are fairly unremarkable while, aside from the 2nd and its central driving bunkers, the par fives are strangely bland. The doglegging 12th, for instance, is poorly conceived and a straightforward prospect for strong players able to drive across the lake and into a vast landing area. Cut by the winding river several times, the split landing area 15th is much better, although the undulating green is excessively skinny and disproportionately long. A number of other green areas are unnecessarily severe as well, such as the left side of the boomerang 17th green, which is an impossible target to aim at given a huge tree guards this side of the green.

Sycamore Hills has all the hallmarks of 1980s Nicklaus design and, despite some problem spots, is a course that has matured well over the years and provided its small membership with much enjoyment. 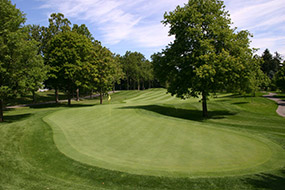 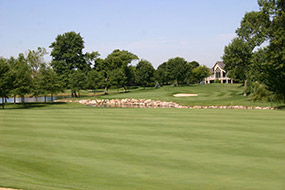 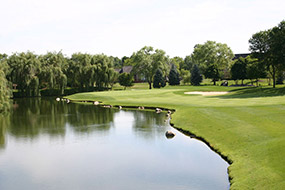