Formed in 1925, the Camargo Club was initially developed to provide alternate golfing facilities for members of the land-locked Cincinnati Country Club. It was later established as a separate entity, however, and built on an expansive tract of countryside in the Village of Indian Hill, north-east of the city. On the advice of Charles Blair Macdonald, Seth Raynor was employed by the founding members to survey the site and begin preparing plans for their golf course. As was his practice, Raynor modelled his design on the work of his mentor, planning replica versions of existing holes that had been identified by Macdonald as outstanding. Despite Raynor’s sudden death in early 1926, the layout was ready for play the following year.

Interspersed with dramatic valleys and ravines, Camargo is mostly built across a series of gently sloping hills and noted for the quality of its replica holes and the nature of Raynor’s bunkers and enormous greens. The trench-like traps are up to fifteen feet deep while the square-edged targets are consistently more than 10,000 square feet in size and steeply canted to leave those hitting too safely away from side flags, or leaving their ball above the hole, with nightmare putts. The course is not long, but it still provides a stern examination of your game as the uphill approach shots can be difficult to judge and the greens are so large that back pins can add 30 yards to many of the holes.

Aside from the scale of some of these impressive green structures, the highlight here is unquestionably the sterling set of one-shot holes, which are collectively the finest on any Raynor course. Modelled after the short holes at St Andrews, the 5th and 11th greens are both set on steep plateaus, the 5th noted for its incredibly deep bunkering and the 11th for a cruel depression through the middle of its vast putting surface. The obligatory Biarritz and Redan holes are also terrific, the latter the equal of Chicago’s famed version and beautifully shaped atop a soft rise and with a clever spine running through the green surface.

Although the par threes tend to capture most attention here, there are also a number of intriguing par fours. The 3rd, for instance, is almost reachable but played along a sharp upslope toward an inviting target that tempts big hitters to flirt with danger in order to set-up a birdie chance. The mid-length 6th, played across a series of small hills, is another fine four, as is the strategically bunkered dogleg 10th, this time dominated by a deep frontal trap that has an uncanny knack of gathering poorly struck approach shots. Another daunting approach is into the 7th, an Alps hole with its immense square green set beyond a blind cross-bunker in a sunken punchbowl. Other interesting green sites include the hog’s-back 12th and the triple tier 16th, which features a large back plateau split in two by a swale.

Classy and quietly understated, Camargo is a special club and a real treat for those with a keen eye for classic golf architecture. A lot of credit for the current state of the course must go to Tom Doak, who has helped preserve Raynor’s design intent by converting bunkers back to his original style and returning the shrunken greens to their appropriate proportions. Despite comparing favorably with other Raynor courses, somehow this one continues to slide under most golfing radars. For the unaware, therefore, a game here is a most pleasant surprise. 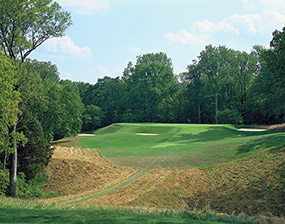 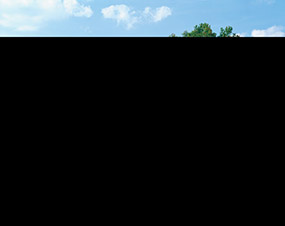