An ambitious development near Sarasota in Florida, the Concession Club is a little gimmicky in the sense that it was supposedly founded in the traditions of great sportsmanship but the careful and sensitive development that wisely removed houses from the golf holes elevates this beyond the standard fare of Florida golf. The idea behind the club was supposedly Tony Jacklin’s, the Englishman wanting to recognize Jack Nicklaus’s sporting gesture when he conceded Jacklin’s final putt in a famous Ryder Cup match. The developer took Jacklin’s idea and ran with it, placing Ryder Cup placards on tee boxes and using the image of the pair walking off the 18th green arm in arm as his corporate logo. He also employed Tony Jacklin as an associate to work with Nicklaus on the actual golf design.

The course itself is really strong, it’s a Nicklaus signature layout with limited input from Jacklin and some liberties taken by the Nicklaus shapers who were clearly influenced by the work Tom Doak had done at Sebonack with the Nicklaus team. The result is more rugged bunker shapes and some overly humped greens that are quite severe and a marked contrast to the typical Nicklaus targets found elsewhere in the US. They also incorporated thick native grasses around the bunker edges to increase the intimidation factor and make the hazards look more natural. Most successful is how natural the wetland areas seem, the painstaking planting of reeds, weeds and other lake foliage making the rather listless landscape seem a much more rugged and interesting place to be. Away from the lakes, many of the holes are cut through forests of tall pines and oaks with a healthy ground cover of Palmetto bush for good measure. Conditioning is generally first-rate, an undergrown fan system was installed to ensure the greens and fairways are playable year round and, importantly, kept firm and fast.

The base design elements at the Concession are very good, this is not typical of other Floridian courses nor is it typical of how readers will imagine a Nicklaus estate course to look and play. The greens are heavily contoured, a couple with balanced ridges running on alternate sides of the putting surface don’t really work but most are fun and interesting to decipher. What hurts the Concession most is the apparent effort to create 18 signature holes, which makes the golf a little taxing and does damage some of the flow and rhythm to the routing. There are also some conditions and course set ups that leave the golfer hitting a number of similar shape and length shots, while at times the design forces your hand a little and dictates the nature of shot to be attempted. The two short par fours at 8 and 12 are good examples, both are well built and feature nice pitch shots but from the tee neither is a realistic gamble and would therefore be played the same way by most golfers in each round. The 12th in particular is worrying because the middle of the fairway is so heavily bunkered that for most players a long or even mid-iron is the only sensible option from the tee. Another sore point is the number of dramatic water carries where you simply smash toward an aiming  bunker on the opposing side of the fairway, if you hit the ball solidly you reach the fairway but if not you get wet.

These issues aside, The Concession Club does have plenty of good holes and clearly belongs among the upper echelon of golf in this part of the country. The par five 7th is probably the most extreme the Nicklaus Company has built and fun to play if long enough to be within reach of the green in two.

The whole development here is well done, there is a special sense of isolation and prestige and the greens, conditioning and general design quality is high enough for most aspiring members to enjoy. 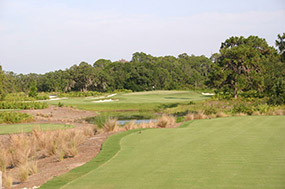 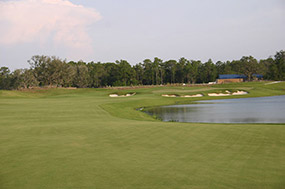 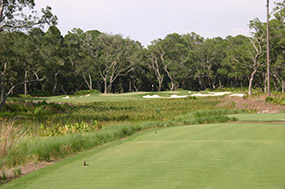 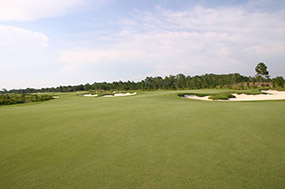