Originally established as an equestrian club by a group of blue-blooded Bostonians, The Country Club was formed in 1882 near the town of Brookline, south-west of the city. Golf was introduced to the property in 1893, with the opening of a rudimentary six-hole course built by members around the club’s polo field and racetrack. With help from Scottish professional Willie Campbell, the layout grew to nine holes the following year and by the end of the century had expanded to a full eighteen.

By the early 1900s golf had become the members principal pastime and an additional tract of land was purchased to allow the club to lengthen its layout in preparation for the rubber-cored ball. This version of the course remains in place today and is best remembered as the host venue for the historic 1913 US Open, won by a young local amateur named Francis Ouimet. In 1927 the club added a third nine by William Flynn, and in subsequent championships a composite layout was created with three and a half Flynn holes replacing three of the shorter originals. Although both Geoffrey Cornish and Rees Jones have since made alterations to these composite holes, thankfully the routing and general design style remains largely unaltered.

Nestled on around 240 acres of beautifully undulating golfing ground, the landscape in places here is reminiscent of the London heathland but with a distinct New England flavor. Across the three nines, the greens are outstanding and they are so small and cleverly tilted that when playing firm they become its principal defence. The rugged bunkering and naturally occurring fescue areas provide a brilliant contrast to the playing corridors and help to further define these wonderful targets.

What makes Brookline such great fun is the constant undulation and the fact that the routing continually alters your direction of play. The better holes tend to reside on the best bits of terrain, with the first such gem being the 3rd, a world-class par four that heads through a narrow valley and then twists around a steep, rocky ledge. For those unable to smash their drive beyond the ledge, the approach will be a long iron or wood shot that needs to skirt past some nasty frontal traps and onto a small green that backs against a road. The next standout is the subtly bending 5th, its drive heading blind across a small hill and the approach played into a sharply angled right-to-left target. The downhill pitch into the miniscule 4th green is also fantastic, as is the par three 7th, its unique double plateau putting surface apparently a remnant from the original 1893 course. The par five 11th (Composite 9th) is another quality hole on quality ground. Again a large rocky ledge can be carried by the brave golfer who wants to get home in two, but this time the green sits atop a well-bunkered ridge and is much less intimidating to approach with a wedge in your hand.

The Country Club was America’s first organized recreational club, and it’s hard to visit Brookline and not feel nostalgic or sentimental. With its classical style of design and wonderfully unpredictable golf terrain, the course itself is truly superb, particularly when conditions are firm and fast. The fact that it doesn’t bear the hallmark of a single golf architect, but is instead the product of many varied minds, makes it even more remarkable. 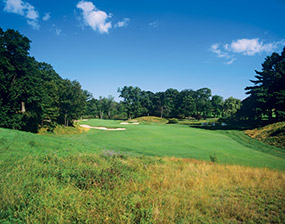