Founded as an exclusive club for the super-rich residents of Locust Valley, The Creek Club opened in 1923 and was initially designed by Charles Blair Macdonald, one of its founding members. Built by his understudy Seth Raynor, much of the course was set down on lower ground beside the Long Island Sound and during the formative years these lower areas flooded badly during heavy rains. With Raynor deceased and Macdonald at odds with the board on how to rectify the situation, William Flynn was hired to look at possible solutions. Working mostly on the 9th to the 13th, Flynn fixed the problem by creating a dike and using the fill to raise fairways and some greens. He also added bunkers on a handful of holes.

Opening with a series of parkland par fours, the layout tumbles from a forested ridge down toward a tidal creek that separates the property from the sea. Linking the two areas is the 6th hole, a wonderful two-shotter that features a unique bowl-shaped green surrounded by mounds and wrapped around an immense front bunker. Uphill shots into the 9th and 14th greens are also very good, as is the tremendous twin-plateau target on the 15th, which is set beyond a deep hollow and usually approached from a hanging lie. The most memorable holes, however, are those around the creek, particularly the 10th, which is a drivable cape-style par four that crosses the inlet toward a fairway pressed against the beach. The 11th is then a superb Biarritz par three, with an enormous island target that is at least 75 yards long and cut into two large tiers by a shallow swale.

Slow deterioration of this course between the 1940s and 80s was mercifully reversed during a recent restoration project headed by Tom Doak, who successfully replaced bunkers and returned lost green shapes to their original proportions. Although the opening and closing holes are still a little underwhelming, The Creek Club is again a charming test of golf and its best holes are more than worthy of acclaim. 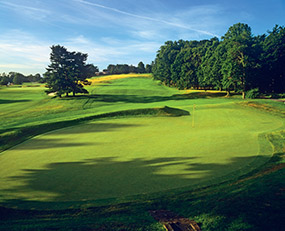