Surrounded by the bustling suburbs of Nassau County, the Garden City Golf Club is a low-key private men’s club that was founded in 1899 on the site of a nine-hole course built the previous year by Devereux Emmet. Emmet’s course was extended to eighteen holes and later revised and lengthened by legendary golfer Walter Travis, during his ten-year reign as Chairman of the club’s Green Committee. Admiring the Emmet routing, Travis lamented the shallowness of his traps and the lack of interesting green contours. He transformed the course by adding around 50 bunkers, deepening others and reshaping all eighteen green sites.

Built upon the expansive Hempstead Plains, the topography at Garden City isn’t overly dramatic but the course is beautifully routed and the designers did a superb job squeezing quality holes out of fairly unremarkable landforms. Appearing quite straightforward, the layout isn’t long nor overly complicated as the fairways are rather generous and the greens come with only subtle breaks and open fronts. The yawning traps and tall native grasses, however, are brutal on stray golfers, and the greens are often canted in such a way as to encourage the player to take undue risks from the tee.

With plenty of half-par holes and hazards arranged to create genuine risk/reward dilemmas, Garden City is particularly well suited to matchplay. It is also quite unconventional, the course opening with a reachable par four and closing with a cross-lake par three. Aside from deciding whether to attack the 1st green by biting off more of the rough, the first real highlight comes at the 2nd, a stunning par three heading over an old quarry pit toward a slender green sloping away from the tee. Other exceptional front nine features include the strategic cross-bunker and highly contoured plateau green on the par five 4th and the rising hog’s-back fairway and wasteland bunker at the cunning mid-length 9th.

More consistently outstanding, the back nine starts with a wonderfully simple par four that is noted for its fallaway green and a vast fairway that is bunkered to encourage players to hit closer to sand than may be prudent. The run of clever par fours from the 14th is equally memorable, particularly the 450-yard 15th, which is split by a deep bunker that separates a lower landing zone from a deceptively angled green set atop an upper fairway shelf. The ending is also very impressive, the 17th a short par five with a tricky front-to-back target and the 18th a brilliant par three inspired by the Eden hole at St Andrews and boasting the steepest putting green on the course.

Seemingly trapped within a time capsule, the Travis/Emmet design here has been remarkably well preserved over the years, with the only significant alteration being the flattening of mounds that originally ran through either side of the 12th green. Steeped in the traditions of early American golf, Garden City is an unpretentious treasure that continues to excite and delight the well-connected New Yorkers who play here. It isn’t the best layout on Long Island, but it does have obvious appeal and, not surprisingly, has developed itself a considerable global following. 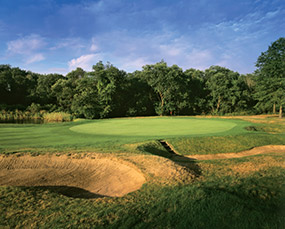 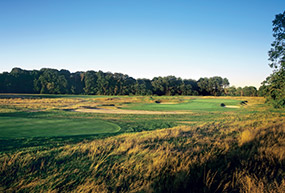