‘I told Mr Jones I liked the property, but actually I would have been tickled to death to build anything with the kind of money he was talking about.’ Pete Dye

Frustrated by increased traffic at his local country club, businessman Frederick Jones started acquiring farmland near New Albany in Ohio during the 1960s with a view to creating a private golf course for his close friends and associates. Pete Dye was still working on the front nine at Crooked Stick, and had yet to establish his reputation when Jones offered him the plum job of designing and building his course. The property he had acquired was now 400 acres, mostly woodland with a creek cutting through part of the site.

For Dye this was a dream assignment as there would be no requirement for housing and few budget constraints, and all Jones wanted from his designer was a course that appeared aged from the moment it opened. Dye obliged by devising a spacious, natural-looking layout and employing a range of grass types, bent for the fairways and tall fescues for the roughs, to give the course a classic feel. Built with minimal earthworks, the course opened in 1967, to be known simply as The Golf Club.

The holes here are routed across the broad landscape with great variety, the fairways rarely running parallel to each other and holes continually altering in both direction and character. The creek comes into play on a handful of holes, most notably the par four 6th where both the drive and approach must carry the hazard. Six further holes feature lakes and ponds, but unlike other Dye courses, this one constantly surprises with its uncomplicated subtleties. There are some exceptional uses of angles, doglegs with ample width and multiple options of attack and water and cross bunkers employed to create strategic driving lines. The 13th, for instance, required substantial earthworks but is a wonderful hole that favors tee shots placed beside a manufactured wasteland, those bailing down the right having to hit their approach over sand and directly toward water.

Another artificial star is the par three 3rd, which heads over a pond but is famous for an unusual bunker complex that wraps around the rear and left side of the green. Here the sand is actually split into a series of bunkers that are staggered, tiered and fortified by sleepers. Some parts are so deep they are not visible from the tee. The genius of a hazard like this is that psychologically the hole becomes more difficult once you have played it and discovered all of its dangers. The rest of the par threes are excellent as well, as are longer holes like the 6th, with its strategic use of the creek, the 12th, 13th and long par four 15th, which features an obscured drive across a bunkered ridge. There is also a fine stretch of simple looking but complex holes through the middle of the round. Both the 7th and 8th are strengthened by steep targets, while the bunkerless 10th is short and wide open but the approach is complicated by a small bank in front of its green.

Despite being one of Pete Dye’s earliest designs, this course is one of the few that hasn’t undergone major revisions over the years. Even the length from the back tees remains unaltered. The only modification of note was made when a large oak beside the 16th green died, which allowed the club to extend the putting surface.

Unlike anything else built during this period, The Golf Club is not just significant because it differs so greatly from Dye’s other creations, but because it remains universally admired and appealing to both progressive and more traditional-minded golfers. 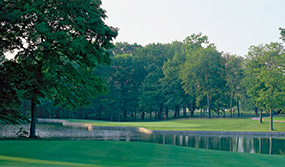