Originally developed during prohibition by a company with connections to the Chicago mob, the Links Course at Lawsonia in central Wisconsin was conceived as part of a hotel, casino and golf destination that fell into receivership shortly after opening in 1930. The property was acquired in the 1940s by the Baptist Church, who continue to operate Lawsonia as a modestly priced, fully public golf facility.

Despite its mainstream anonymity, Lawsonia Links is a rare find that provides as complete and thorough a test of golf as almost any public access Golden Age course in the country. Built on gently sloping land but on a most surprising scale, Architect William Langford was chiefly responsible for the design. His holes boast a strong Seth Raynor–type feel, the fairways guarded by large grass-faced trench bunkers while the built up greens are often huge and with flanks that drop more than 10 feet in places. Short siding yourself can leave you hopelessly out of position here but the greens are so large and well conceived that bailing away from dangerous pins leads to many three-putts. One particular green is believed to have been built right on top of a boxcar.

The opening hole is a perfect introduction to Lawsonia Links, the green so steeply pitched that driving down the safe side can easily lead to a bogey or worse. The huge plateau putting surfaces on the long 5th and 6th holes are memorable, as is the boxcar par three 7th and the cape-style par four 9th. The back nine is less expansive than the front and holes tend to follow a more compact back and forth arrangement with better moments including the diabolical away–sloping green at the 12th, the severely bunkered par five 13th and the uphill 15th.

Though some of the drive hazards are no longer properly in play for strong golfers, you need to be on your toes throughout as the high-lipped bunkers are a full penalty when found, meaning strokes can be given back to par just about anywhere on the course. For many Lawsonia Links is the ultimate hidden gem, and for green fee paying golfers it comes highly recommended for the sport of the design and the rare nostalgic charm of the experience. 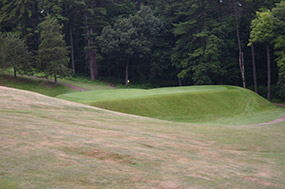 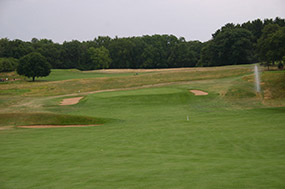