Surrounded by the Allegheny Mountains of western Virginia, The Homestead is an historic luxury resort located in the delightful spa town of Hot Springs. The birthplace of golfing immortal Sam Snead, the town’s first course dates to the 1890s but its best was designed for the resort by William Flynn in 1924.

Known as Cascades, the layout is wedged in a narrow, sloping valley between large mountains and appears cut directly from its natural surroundings, despite substantial earthworks being required to make the playing areas level. Flynn’s use of the undulating terrain is very impressive, as are his softly contoured green sites, which often break the opposite way to how they appear to lean.

To squeeze eighteen holes onto this slender property, Flynn had to build three of his opening holes higher into the hills, on the other side of a busy entrance road. Though this steeper ground is reasonably well used, the best golf is found down on the main property and mostly through the middle of the round. Front nine standouts include the huge par five 5th, which crosses the shoulder of a large hill and has three distinct landing areas, and the rising, side-hill 7th. The best on the back are the cross-pond par three 18th and the unique par four 10th, which falls twice along a staggered fairway shelf. The two-shot 12th is another terrific hole, this time set in an attractive vale alongside the creek. As with many holes here, internal tree growth and the addition of cart paths have somewhat damaged Flynn’s design intent, his fairway initially set hard against the creek but now unfortunately separated from the water.

Although a distance behind his finest creations, Flynn’s course at Cascades has long been a popular summer stop for holidaying golfers and the layout will hold particular appeal for those who enjoy playing in such picturesque surrounds. 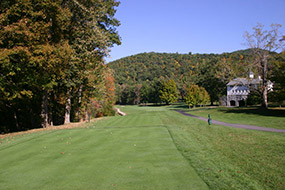 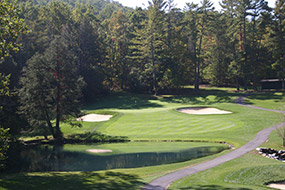 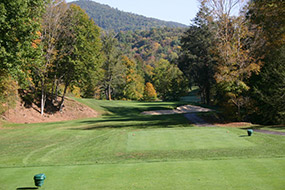 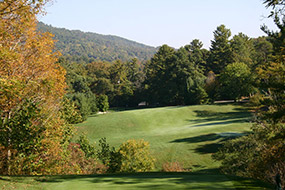