Created to honor and preserve the traditions and spirit of the amateur game, the Honors Course was founded by Coca-Cola bottling magnate Jack Lupton, a member at Augusta National and friend of the late Bobby Jones. Lupton had acquired land in a secluded wooded valley to the east of Chattanooga and employed Pete Dye to build him a championship caliber golf course. Dye at the time was shaping some of his wildest modern creations, yet he was instructed to design this track in line with the traditions of early 20th century architecture.

With a spacious landscape and plenty of appealing ground movement, the layout was built with minimal disruption to the natural terrain, save for an irrigation lake through the middle of the property and some rather extreme shaping around the greens. Holes are generally cut through an attractive collection of oak, ash, dogwood, hickory, persimmon and willow trees with a superb variety of unkempt native grasses helping provide contrast and define the playing areas.

Designed to challenge the game’s great amateurs, the Honors is one of the more demanding layouts in the region, particularly since recent lengthening has stretched the back tees beyond 7,300 yards. Although the entire course is a strong and consistent test of your game, the front nine shades the back slightly in terms of the individual quality of its holes. The heavily contoured par three 3rd is the first significant test, followed by a pair of strong two-shotters that bend in opposite directions, the 4th with a lovely raised false front green and the 5th with a severe target area strategically angled to favor those able to hug the dogleg from the tee. The talking point on this side, however, is the mid-length 9th, which features a narrow green leaning steeply toward a pond pressed hard against its putting surface. Complicating the hole for those driving too safely down the right side is a mound that obscures the target and makes the sideslope pitch directly toward the water even more daunting.

The back nine begins with a brutal par four, which has been stretched more than 50 yards since opening and the downhill tendency of the fairway neutralized to reduce run for bigger hitters and make it play even longer. Fortunately things ease up a little from here, with better sections including the tiny crowned 12th green, which is set on a gentle ridge beyond a series of traps, and the strategic par four 15th, which bends around the lake and features a more generous bail-out area than some may expect from Dye. The tightly treed 18th is an excellent closing hole while the short 14th, originally played over a sandy waste, is now a really pretty par three across rugged native roughs to a skinny green set beyond a deep frontal bunker.

The Honors Course has done a tremendous job establishing its championship credentials over a relatively short period. The fact that the average club golfer has little chance of ever getting through the gates is disappointing, but the club ought to be commended for focusing on the amateurs and for successfully bringing top-line golf to Tennessee. For those fortunate enough to play here the complete absence of non-golf distractions, as well as the rich textures and colors of the landscape and the sounds of a site alive with nature, combine to make it a pretty special experience. 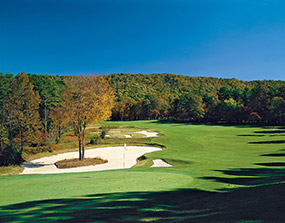