Designed by former Pete Dye protégé Bobby Weed, The Olde Farm opened in 2000 shortly after Weed had stopped building TPC courses for the PGA Tour and gone into design under his own banner. Weed’s client at Olde Farm was a lawyer turned coal magnate, who handed him a beautifully rolling piece of ground in a valley that was once an access route through southwest Virginia for Confederate Soldiers during the Civil War. The club honors this combat past by assigning each new member to either a Blue or Grey army, and organizing an annual tournament where the army’s partake in a Ryder-Cup style contest.

The course member’s golf upon at Olde Farm is one of the real treats of the region, and more than just another super-exclusive, immaculately-presented modern retreat. It’s also more than just another TPC-style tournament test. Most of the golf is laid north-south across the property, with broad fairways and generous greens built to reward golfers able to drive accurately and then keep their ball beneath the hole. Weed apparently conceived of his routing here in a matter of days, and retained a couple of since-refurbished rustic barns that have become central to the Olde Farm experience. One is a Party Barn set immediately right of the excellent 10th hole, while the other is a fully stocked comfort station with all manner of snacks and refreshments. Named the Long Barn, golfers approach the structure three times during the round and are able to drive their carts right through the building. Few visitors leave unimpressed by the novelty of this amenity.

On course, the best golf tends to be through the lower central areas, and where the elevation changes are more subtle. Perimeter holes like the 3rd and 4th, which hop aggressively along steep ridges, are exciting but a tad severe when compared with better holes across the lower ground. The softly contoured drivable par four 8th, for example, and mid-length 7th, with its shallow dell-like green site, are both great fun to play and full of options and strategic appeal. Wedged between is an attractive par three played to a tight target set right beside the hospitality barn.

Other obvious highlights include the strong cross-creek 13th and the charming par four 10th, where the tee shot heads across a bunkered crest and adjacent the Party Barn. Drives nearer the barn here are generally rewarded with a preferred angle into the left-leaning green site. Giving the course its teeth are sharply angled and elevated green complexes at the end of each nine and demanding par fours like the 16th and 17th, where long, precise shots are necessary from both the tee and fairway.

Generally speaking Weed did a good job with his design at Olde Farm building interest into the layout, and using natural features to nice effect. The contrast between his lush playing areas and surrounding pasture grasses makes for an attractive aesthetic. Design wise his mix of large, contoured greens and smaller, angled targets is well balanced and importantly open in most instances to a running approach shot.

This corner of the USA isn’t exactly a golfing powerhouse, but the Olde Farm is undoubtedly the best modern layout in the area and both a fun course to play and very fine club to join, for those seeking that rare triumvirate of ambience, exclusivity and golf quality. 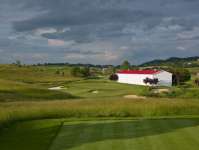 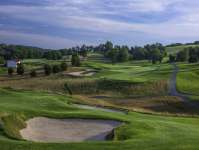