For those with appropriate connections, the Sandhills region of central USA has become one of the most appealing golf destinations on the planet. It all started with the 1995 opening of the appropriately named Sand Hills Club in Nebraska, designed by Bill Coore and Ben Crenshaw and responsible for reintroducing Americans to the charms of classic, linkslike golf. The success of this “build it and they will come” experiment inspired a host of other developers to try their hand at remote, destination golf. Not surprisingly, many chose this same enormous dunescape to build their field of dreams, most notably at Ballyneal in northeastern Colorado, Dismal River near Sand Hills and at The Prairie Club in Valentine, Nebraska, a few hours north.

The Prairie Club was developed by a local commercial banker, and differs from Ballyneal, Dismal River and Sand Hills in that it will accept green fee paying golfers. The property here covers an enormous area, and features two full-length courses and a fun 10-hole par three course designed by Gil Hanse. What the club does share with its relative neighbors are vast dune formations and fantastic golf undulations, as well as isolation and an unapologetic focus on golf over everything else.

Both the Pines Course, designed by Graham Marsh, and the Dunes Course by Tom Lehman and Chris Brands, opened in 2010. Each represented a significant design opportunity for the various teams tasked with their creation. A former Australian PGA Tour Professional, Marsh had earlier designed Sutton Bay in nearby South Dakota and it’s believed that a friendship between the two developers led to his appointment at the Prairie Club. Unlike Lehman’s Dunes Course, the Pines is mostly set on softly rolling land and wanders into a wooded forest alongside the rim of the Snake River Canyon. Determined to ensure his layout flowed easily from hole to hole, March resisted pushing too many features high into the dunes, and as a result his course sits nicely on the landscape and is both easily walkable and playable for all.

Unsurprisingly, the highlight of the Pines Course are the canyon holes as well as the back nine par threes and the use of sculpted waste bunkers as driving hazards on holes like the 5th, 11th, 12th and 16th. These waste bunkers help to tie the open dunes areas with the holes amongst the trees. The short par five 2nd and driveable par four 9th holes are also very good, as are some of the intricately contoured putting surfaces through the latter part of the front nine, which feature plenty of internal break. One minor criticism, is that some of these greens seem a little busy, and a handful of holes feel over-bunkered. The traps are skillfully crafted and attractive, however, and these minor issues fail to detract from a quality set of holes and a terrific course that the vast majority are likely to thoroughly enjoy playing.

Those who have driven through this remote stretch of Nebraska will appreciate the vastness of the enormous dunes landscape here and the potential for great golf to appear all across the American heartland. The Pines Course doesn’t quite reach the heights of Ballyneal or Sand Hills, but as an affordable and publicly accessible golf facility both it and the Dunes Course come highly recommended, especially for those unable to get onto the more private clubs. 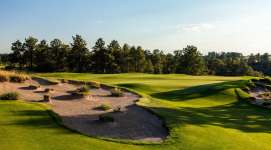