The Quarry at La Quinta

Situated within California’s arid Coachella Valley, the Quarry at La Quinta is a luxurious private club nestled into a rocky cove at the base of the Santa Rosa Mountains. The course was opened in 1994 and designed by architect Tom Fazio, who aggressively reshaped a 370-acre gravel pit into a sumptuous golfing haven by integrating lakes, streams and waterfalls into his desert landscape.

While most of the course is built within the expansive quarry, midway through the back nine the layout briefly wanders up into an elevated valley, which Fazio actually encouraged his client to purchase prior to completing his routing. Squeezed tightly between a couple of small mountains, these valley holes follow a winding canyon and rise as much as 200 feet above the rest of the course, which is either set down on the quarry floor or built across a central plateau.

Despite significance variances in terrain, Fazio cleverly incorporated all of the elevation changes into his routing, without holes ever feeling overly steep. He ensured visual continuity through immaculate landscaping and by continually aligning fairways and approach shots toward the magnificent mountain peaks. The design itself is playable, creative and, in places, highly strategic. Holes generally feature well-defined modes of attack and present a range of recovery situations for those off their game. Fairways and greens are generously proportioned, the putting surfaces complete with believable contours and effective false fronts and tiers.

Starting from the lower portion of the property, the round begins with a sweeping three-shotter and a strong valley par three, which are both great introductions to the fun and challenge ahead. Aside from the almost vertical drop-kick 8th, the remainder of the short holes are excellent, while the par fives generally teeter on the edge of par and, although dangerous, offer aggressive players the incentive to attack. The most memorable holes, however, are the two-shotters, particularly those through the middle of the round. The first gem is the 6th. Played with a stunning backdrop, it falls toward a shallow basin green angled in from all sides and wrapped around a nasty frontal trap. The 7th is another beautiful hole, this time following a creek that runs the entire length of the fairway and featuring a green that is bunkered to encourage players to drive close to the water. Other strong fours include the 9th and 16th, which is also dominated by a creek down its left side, the water on this occasion cutting in front of the putting surface. Up within the higher ground, the 13th is a shorter four that bends around the canyon, its sharply contoured green favoring golfers able to bite off most of the hazard. The 14th is then a gorgeous par three played directly across this same natural ravine.

As one might expect from a club of this nature, the amenities here are outstanding and turf conditioning is of the highest standard year round. Also worthy of mention is Fazio’s ingenious short course, built on land acquired by the club to protect its existing boundaries. Featuring ten greens and ten tees, this par three layout also contains a series of adjacent fairway areas, allowing the members to create their own alternate drive and pitch holes. With the quality and originality of this practice area mirroring the impressive design standards set on the full course, the Quarry at La Quinta is a real class act and one of the finest establishments in the ever-expanding Fazio portfolio. 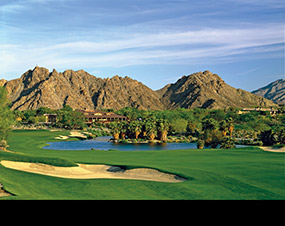 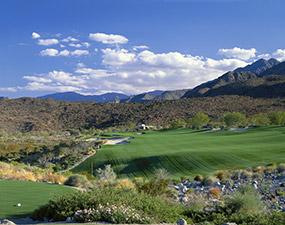 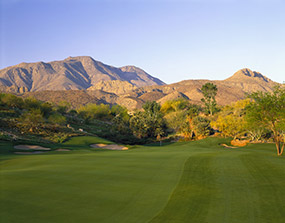