Built in the 1960s by William Gordon as a deluxe private club in Greenwich, Connecticut, the Stanwich Club is a beautiful parkland course with some of the fiercest greens and tightest fairways in the region. In truth the current test is more Tom Fazio than William Gordon, as a substantial overhaul and redesign by Fazio in 2002 upgraded the course that Gordon had created. Fazio softened some of the more severe greens, added 30 or more bunkers and removed thousands of trees to open the fairways and playing corridors. Despite some good work, the course is still tight in places and very difficult with even the remaining Gordon greens, particularly the 15th and 16th, so tiny that they remain a very real challenge to all golfers. Fazio’s greens are not huge but they do allow for more pin positions.

After the opening nine tracks up and down some subtle slopes, the back nine is most routed around these interior holes incorporating some flatter patches around a pond on the 14th and 15th. Better moments include approach shots into the small 2nd green, attractive par threes at the 4th and 13th, a steep plateau green at the 7th and the strong par five 17th, which runs along a creek.

Stanwich is beautifully maintained and attractive to play, there are lots of really tough shots to hit, especially into greens, but the course does lack the sort of clever holes needed to elevate it among America’s elite. 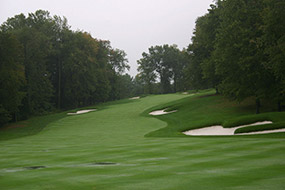 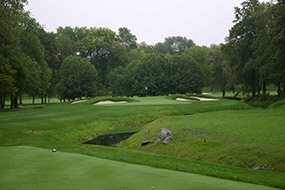