One of the boldest and most audacious golfing creations of the last half-century, the Tobacco Road golf course in Sanford, North Carolina, was designed by the late Mike Strantz and first ready for play in 1998. Located a short drive from the venerable Pinehurst Resort, the Strantz design is as removed from that old-school, understated treasure as you will find anywhere in our game. Where Donald Ross preferred low-set fairways and inverted saucer greens, Strantz sought to overwhelm his soft, sandy landscape by building radical features and heaving undulations. Although not all of his shapes work as well as he might have liked, each and every one of his holes is certain to leave an impression.

The creativity of the Strantz design is the highlight of The Road, particularly around the green sites. Pushing the envelope a little too far in places, the emphasis nonetheless seems to be on fun and originality. Whether lining up for a birdie or recovering after a poor approach, you constantly experience putts, pitches and chip shots around these greens that you haven’t seen before. Similarly from the tee, a number of drives are played across sandy wastes or stiff hazards, and to landing zones that seem able to lure you nearer to danger.

In terms of strategic arrangement, there are a couple of holes where the aggressive play isn’t a sensible option, but mostly reward appropriately follows risk. The fun thing about Tobacco Road is just how many opportunities you get throughout the round to summon up courage and “go for broke”. Even the more extreme holes, such as the 2nd, 7th, 9th and 13th, offer golfers hitting good shots the opportunity of a decent score. Of course each is more than capable of tormenting those slightly off their game. Across both nines, dense ridges and rolling hills provide little respite for stray golfers, and the ever-present sand hazards and sharp putting contours are brutally efficient at punishing those whose ambition overstretches their ability.

More consistently exciting than the back nine, the best holes on the front side include the par five 4th, which bends around an enticing sand hazard, the short, confusing par four 5th and the epic two-shot 7th, complete with as artistic a manufactured green site as you will find in this part of the world. The opening hole also charms, despite a semi blind tee shot through a narrow dune pass that is unpopular with many golfers.

Inward nine highlights include the ever-tempting par five 11th, the elevated dell green complex on the long 13th and the cross-pond par three 14th, whose target is angled cleverly toward the water to complicate recovery for timid golfers. Each is more traditional and more effective than experimental features like the super shallow, sunken green at the 15th and the forced lay-up on the blind, short par four 16th. Neither quite works the way Strantz would have wanted. His angled 2nd fairway is also problematic when played from the forward tees.

Despite these minor concerns, this wonderful layout is a must-play for anyone interested in learning more about the life and work of its visionary designer. The sad death of Mike Strantz in 2005 was a loss to our industry and we celebrate Tobacco Road in this book as a modern masterpiece, not only for its beauty and originality, but for the odd moment of pure, unexpected genius. 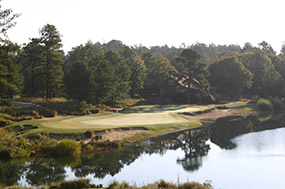 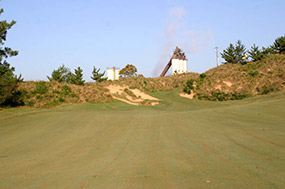 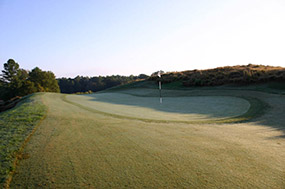 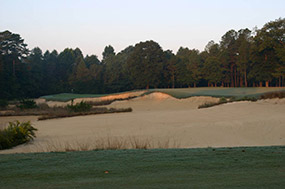