The Tournament Players Club at Sawgrass was the brainchild of former PGA Tour commissioner Deane Beman, whose idea was to build a stadium-style course for the tour’s annual Players Championship. In 1978 he purchased 415 acres of swampland in Ponte Vedra Beach for a single dollar and instructed Pete Dye to design him a tournament layout. Flat, sludgy and covered in dense palmetto scrub, the site was far from ideal for golf, but Dye created an appropriately demanding test by digging a series of deep lakes and using the fill to create mounding for the spectators and more intricate playing contours for the golfers. Interestingly, his original plan for the 17th included only a small pond, but sand was discovered around the green and the excavated area grew. Eventually the pit became enormous and Dye’s wife suggested the hole become an island par three. The rest, as they say, is history.

The Stadium Course at Sawgrass opened in time for the 1982 Players Championship, but dissatisfaction from the professionals forced Dye to soften a number of holes and make a series of other changes over the following years. Despite its teething problems, the layout eventually became widely accepted within the industry and was one of the most influential courses of the 1980s.

Aside from a number of wonderful holes, there is a tremendous balance to the routing here as hole lengths vary and direction and doglegs change continuously. Dye also worked hard on angles of play, shaping holes to present golfers with clear strategic choices both from the tee and into the greens. Despite the target-style nature of the test, most greens are open at the front so if in control of your golf swing, and thinking clearly, it is possible to avoid disaster and post a respectable score. There is no let-up for poor play, however, as penalty areas are severe and a mix of traditional sand bunkers, grassy depressions, moguls, thick rough and water.

Surprisingly subtle in places, Sawgrass is a beautifully built course with narrow fairways and small, contoured putting surfaces. The round opens with a really tight driving hole, its angled green a particularly harsh target for those unable to hit close to a large fairway bunker. The next gem is the short 4th, featuring a daunting cross-water pitch into a gorgeous green breaking sharply off its safer right side. A number of par fives also feature cool shots into difficult greens. The 9th, 11th and 16th are all cleverly designed to ensure that only precise lay-ups can prevent complicated pitch shots. The 11th is split by a lake and a long waste bunker that forces golfers to choose either a tight left shot over water or a tight right shot close to water. The 9th turns left near the target and features a narrow landing zone for the second shot and a tiny green site guarded by tall trees and sand. The 16th is then a classic gambling hole turning around pines and running against a lake, the conservative player needing to hit their second shot near water or be blocked by a large tree for their third.

The next is, of course, an American legend. Suspended on a bulkheaded podium in the middle of a lake, the hole is one of the most significant par threes in golf and works largely because the green contours make the target appear smaller than it really is. Most will use a 9-iron or wedge here so unless presented in tournament condition, you have to hit a pretty poor shot to find the water. The genius, if you like, of the hole is its location near the end of the round, golfers stand on the tee knowing that one bad swing can spoil their entire day. The 18th is another signature hole; this time bending left around the largest lake on the property and wonderfully shaped to somehow draw your eye closer to the hazard. The hole is brutal on those unable to hug the lake, as bailing away leaves you with a nasty second shot into a green angled toward the water.

The Stadium Course has become a modern icon, thanks largely to the infamy of these cruel finishing holes. Its success, and the explosion of copycat courses, has made it increasingly difficult to make such holes interesting, yet these have somehow retained their sense of fun and originality. Despite the fact that it was built for the best players in the world, thousands of golfers flock to Sawgrass every year to be beat up by a ruthless and penal adversary that must surely rank among the most outstanding versions of this much-loved golfing genre. 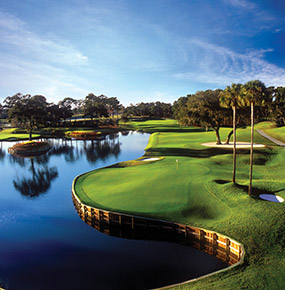 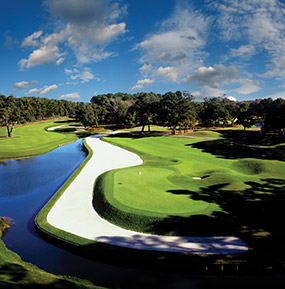 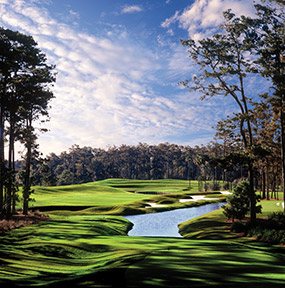 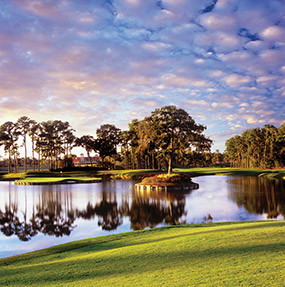