The Troon Country Club is arranged in two loops on either side of a major road, the layout supposedly a tribute to Scotland’s Royal Troon course (where designer Tom Weiskopf won his British Open) and really a tale of two parts. The front nine is flattish, quite interesting at times but a long way from being described as an elite place for golf. Cross the road and after a slightly dated split fairway par four, that is a little easier to play aggressively with technology, the course moves onto a contrasting back nine that traverses some interesting terrain, incorporates a dramatic canyon and is sprinkled with good golf holes.

The par five 11th is a good, slight dogleg hole where left side traps dictate the strategy on second shots, the 12th is then narrow, crossing a crest from the tee and falling nicely. The 13th is a long tribute to the Postage Stamp that is a moderate success, but next few holes are really pleasing. The 14th is a desert version of the 8th at Pebble Beach, the drive crosses a crest, runs along a plateau beside a canyon and then features an exciting downhill approach shot over the desert and into a small greens with the canyon on your right. The short 15th is a beautiful par three, the small green with a slight step and nice back pinable areas. Short par four 16th then drops and narrows as it approaches a very cool bean-shaped green that slopes to the right and the front and falls to the front left. The final two holes are pretty strong finishers, and a pleasing end to a solid layout.

The base elements at Troon Country Club are solid, some of the driving zones are a little dated, but generally speaking this is a good golf course that most will enjoy playing. 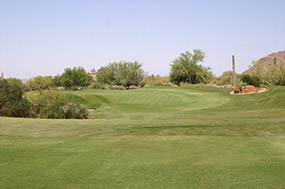 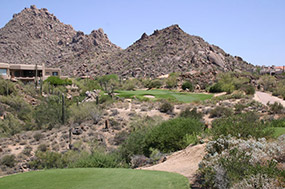 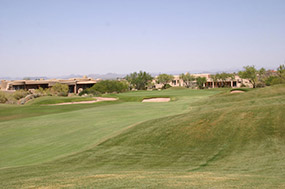