Situated atop an old garbage dump, the Trump International Golf Club was developed by real estate tycoon Donald Trump and its course designed by architect Jim Fazio, apparently in association with his famous client. The club cost a fortune to build, as the amenities are lavish and Fazio moved 3 million cubic yards of earth to transform the flat site into a golfing oasis. Much of the work involved digging deep lakes and using the fill to create mounds, one pile rises almost 60 feet and was once the highest point in the West Palm Beach area.

Squeezed along an arterial road, the layout does get a little cramped in places, though the use of vegetation and heavy shaping has made it feel more spacious. Most of the visuals are dominated by either lakes or mounding, but unfortunately the shaping is fairly unnatural while few of the water holes offer any real strategic merit. The huge multi-million dollar waterfall behind the par three 17th also seems a big waste of Trump’s money, although the hole itself is well built and the modestly contoured peninsula green relatively effective. Other worthwhile holes include the par five 3rd, its green, wetland area and second shot options from back in the fairway are all very good. As is the par five 15th, probably the best hole on the course and certainly the most interesting if long enough from the tee to have to choose between tackling the narrow chase-in green entrance or bailing right and then pitching to the target.

As one would expect from such an extravagant facility, water is in play on most holes, turf conditions are generally first-rate and the clubhouse is opulent and eye catching. The experience itself is likely to satisfy many golfers, but it is hard to see seasoned players being overly impressed, and difficult to justify the decision of the good judges at Golf Magazine to include the course within their Top 100. 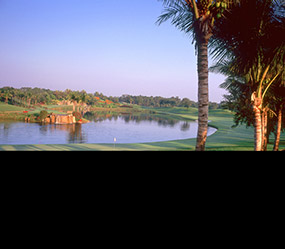