Located a few miles west of the USGA headquarters in Far Hills, New Jersey, the Old Course at the Trump National Golf Club was designed by Tom Fazio and opened for member play in 2004. Set amongst the gentle slopes of Bedminster, the course was initially developed by a company that struggled to finance its construction following the September 11 attacks in 2001. The partly-built layout was later purchased by Donald Trump, who established a private club on the property, supervised the completion of the course and then added a second track a few years later.

Well built and attractively finished, the Fazio course is certain to please a key golf demographic, as its conditioning and amenities are first-class and there are plenty of water holes and eye-catching architecture. Design-wise, however, there is little new or interesting here, particularly out among the more open areas where the vast playing areas and large, sprawling bunkers offer little strategic interest or any real advantage to golfers hitting into dangerous areas. The best holes are probably the one-shotters. The three that play over ponds are all decent while the longer 14th, which crosses a rough covered ditch, features a fun and effective, rolling green site. Less effective is the course’s signature hole, the downhill par four 6th, which bends a little right and plays toward a peninsula green jutting into a lake. Despite being aesthetically attractive, the putting surface is unduly complicated by a hump through its front half and a split tier through the back, both of which can kick well-struck irons, headed toward the heart of the green, off into the water.

With a few good holes and enough redeeming features to keep most players entertained, Trump National is superior to the other Trump courses but still a long way from the best in this region. For those who have experienced lots of quality golf, its inclusion among Golf Magazine’s Top 100 will be a surprise. 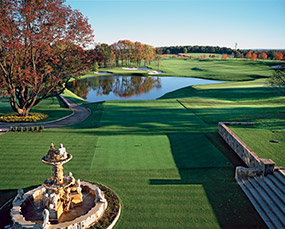